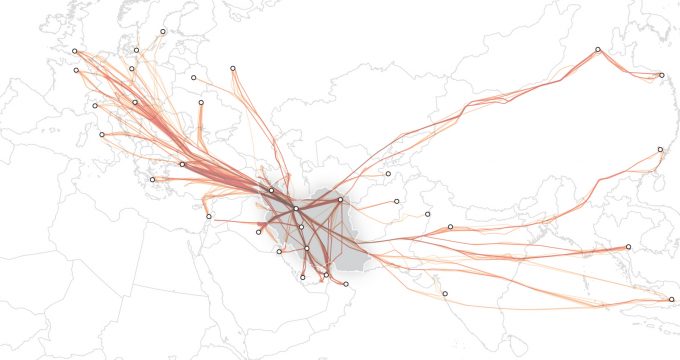 Washington Post|Max Bearak & Aaron Steckelberg: It has been almost a year since the nuclear deal between Iran and Western powers went into effect. Meant primarily to curtail Iran’s uranium enrichment program, the deal also paved a path to the opening of Iran’s doors to the global economy. Since the Islamic Revolution brought fervently anti-American forces into power in 1979, Iran’s government and citizens have faced intense sanctions, especially on international financial transactions. This January, the European Union and the United States lifted some of those sanctions.

Many, especially in Iran, imagined an ensuing gold rush. And while that hasn’t exactly come to pass, there are some major indications that Iran is able to interact more and more with the rest of the world. One simply has to glance skyward to see one of them.

International air traffic to and from Iran is booming. At the country’s main airport in the capital Tehran, for instance, there were 140 more flights during a week last month than a week in May 2015 before the nuclear deal was signed.

The map above uses data from FlightRadar24, a company that tracks real-time flight data. It shows a remarkable thickening in routes, as well as the narrow spindles of new ones. Much of the growth in international air traffic is due to airlines increasing capacity or frequency of existing routes. But it also includes many European airlines, such as Air France and British Airways, that have been able to restart flights to Iran after long hiatuses.

Earlier U.S. sanctions had prohibited planes with American-made parts from flying to Iran, precluding many airlines from flying there. Both Boeing and Airbus, the two biggest plane manufacturers, use American parts.

Not only can those planes fly to Iran now, but the state-owned flag-carrier, Iran Air, inked deals worth tens of billions of dollars this summer with both companies to buy hundreds of planes. Those deals have not been finalized, and are subject to a slew of skittish “ifs and buts” stipulated in the nuclear deal. Iran Air’s eyes may have been bigger than its stomach, too — analysts doubt that the company can afford the planes — or even if they did, compete with established foreign airlines.

Iran Air has had to fly planes from before the Islamic Revolution, as well as Russian-made Tupolev jets due to the sanctions. The airline has an abysmal safety record, and Iranians prefer to fly airlines from the Gulf and Europe. But the massive aircraft order — which would make Iran Air larger than Air France — demonstrates the lofty hopes for growth in trade and tourism.

“Iran went from a marginalized and difficult place in the world economy in 2013 to a place of growth,” said Ray Takeyh, a fellow at the Council on Foreign Relations specializing on Iran. Recent IMF data indicates that the nuclear deal will transform Iran’s economy from one that was declining to one that will grow 4.5 percent in the current financial year. New or additional routes after June 2015

There is a sense of optimism regarding Iran’s economic growth. Iran is four times the size of California. It has vast oil reserves. It is home to a civilization thousands of years old, and has immense historic import and touristic potential. Amin Chini, an Iranian aviation enthusiast living in Sweden, maintains a running list of routes to his home country, which we used for the diagram above. There are dozens of new, expanded and planned routes.

But that optimism is tempered by Iran’s politics. Iran is a theocracy, and its religious leaders are extremely wary of foreign influence. And while the current president, Hassan Rouhani, has promised to continue improving relations with the West in the wake of the nuclear deal, the Iranians have continued to arrest foreigners, particularly Iranian American dual citizens, accusing them of spying.

“The incarcerations really have a major chilling effect on business,” Takeyh said. “You begin to see the contradictions implicit in Iran’s post-deal future.”

In the years of isolation after the revolution, Iran found ways to be self-sufficient. That protectionism won’t fade away quickly, if at all. Takeyh said that Iranian leaders look at what happened in China after that country loosened its adherence to its founding values. Now China is essentially a capitalist country.

A lot of that wariness is toward America (just look at the twitter timeline of Iran’s supreme leader, Ayatollah Khamenei for vivid examples). America reciprocates in kind. That’s why you won’t see any American city in the charts and maps above anytime soon. Patrick Clawson, at the Washington Institute for Near East Policy, said that the Americans would demand to do their own safety inspections of Iranian airports.

“Imagine armed American personnel at Imam Khomeini International Airport,” Clawson said, referring to Tehran’s airport, which is named after Ayatollah Khamenei’s predecessor. “How far away from Iran-U.S. flights? About a gazillion years.”