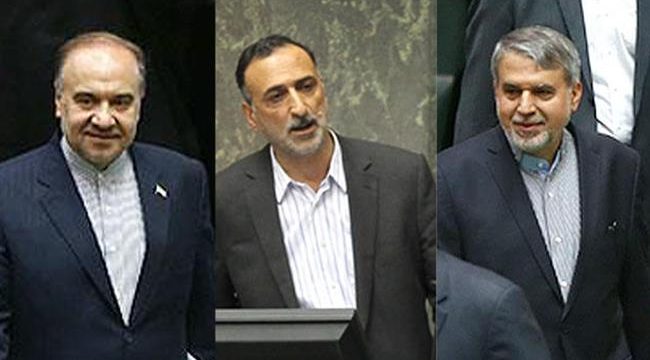 Iran’s Parliament has given votes of confidence to three candidates proposed by President Hassan Rouhani to lead the ministries of sports and youth affairs; culture and Islamic guidance; and education.

After extensive debates during two Parliament  sessions on Tuesday, Rouhani’s picks for the three ministries obtained the green light from the Iranian lawmakers.

At the end of the evening session, Reza Salehi Amiri, the proposed nominee for the Ministry of Culture and Islamic Guidance, received the vote of confidence with 180 Iranian lawmakers in favor while 89 were against him and six abstained.

This as 193 lawmakers also gave their approval to Massoud Soltanifar, as the president’s pick for the Ministry of Sports and Youth Affairs. Some 72 lawmakers opposed him and nine abstained.

Fakhroddin Ahmadi Danesh Ashtiani also achieved a yes from 157 legislators while 111 were against him and six abstained and became the new minister of education.

In a letter to Iranian Parliament Speaker Ali Larijani on October 23, the president introduced the candidates for the three vacant ministerial portfolios for votes of confidence.

The president’s move came after the resignation of Ali Jannati, Mahmoud Goudarzi, and Ali Asghar Fani as the ministers of culture and Islamic guidance, sports and youth affairs and education, respectively, last week.