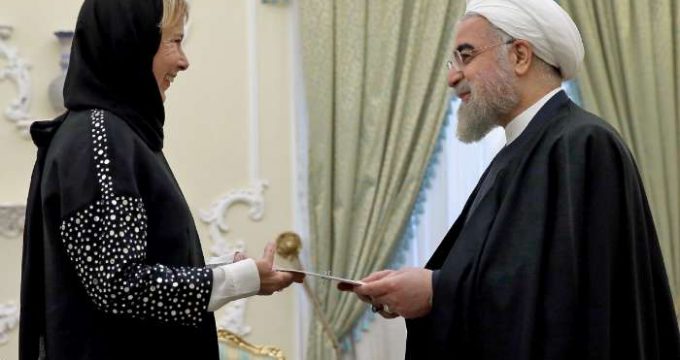 TEHRAN (Tasnim) – Iranian President Hassan Rouhani on Monday met with new ambassadors from a number of European countries in Tehran.

In a meeting with Albania’s new accredited ambassador to Tehran, President Rouhani highlighted the importance that his administration attaches to closer ties with the Balkan States. “Promotion of cooperation with the Balkan States, including Albania, has been always important for us,” the president said.

Highlighting the cultural commonalities between the two countries, the president also voiced Tehran’s willingness to boost cooperation with the European country in economic, cultural, scientific and tourism fields. He also stressed the need for efforts to let companies of each of the two countries know about the investment opportunities available in the other.

In a separate meeting with Moldova’s accredited ambassador, President Rouhani underscored that Iran sees no obstacles to enhanced relations with the East European nation. The Iranian president also received the credentials of Sweden’s new envoy in another meeting.

“Today, in the post-JCPOA and post-sanctions era, there is excellent condition for expansion of bilateral, regional and international relations between Tehran and Stockholm, which should be employed for the good of the two nations,” Rouhani underlined.

The Swedish diplomat, for her part, highlighted the Scandinavian country’s enthusiasm for closer trade and banking interaction with Iran. The Iranian president has frequently called on European enterprises to take the opportunities provided by the Joint Comprehensive Plan of Action (JCPOA), a lasting deal on Tehran’s peaceful nuclear program.

Tehran and the Group 5+1 (Russia, China, the US, Britain, France and Germany) on July 14, 2015, reached a conclusion over the text of the JCPOA.

The accord took effect in January and was supposed to terminate all nuclear-related sanctions against Iran all at once, but its implementation has been hampered mainly due to US policies.