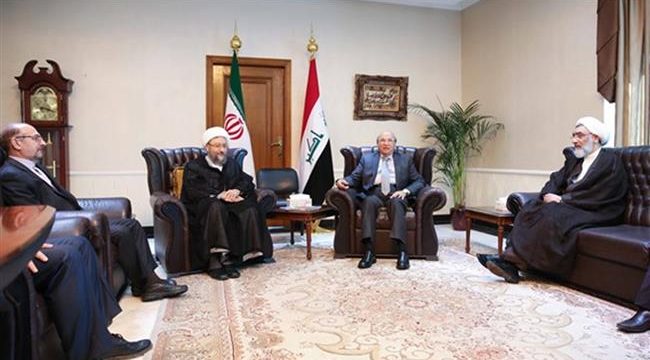 Ayatollah Sadiq Amoli Larijani who is leading a delegation to Iraq to discuss with Iraqi judiciary officials bilateral ties and judiciary cooperation, told the press that both sides shared views on terrorism and human rights, IRNA reported.

Mr. Amoli Larijani also provided details of some of agreements with Iraqi officials on prisoner swap and extradition of convicts, along with other judicial and human rights cooperation; “there is considerable level of understanding between two countries about the view of Islam of human rights; on terrorism, Iraq faces the problem. We share the view with Iraq that terrorism should be dealt with seriously, and signed an agreement to promote Islamic human rights versus western human rights in international community,” he added.

Mr. Mahmoud for his part believed Iran and Iraq could cooperate in best manner since both countries shared and practiced the same principles of justice according to Islamic sharia; he also added that the part of the agreement on judicial issues included Iran’s judiciary’s contribution to training of Iraqi judges; “the agreements will improve ties in fighting terrorism, smuggling of goods and drugs, and fighting organized crimes,” Mahmoud added.

Ayatollah Amoli Larijani held a round of discussions with al-Mahmoud on Sunday as part of the Iraq visit.