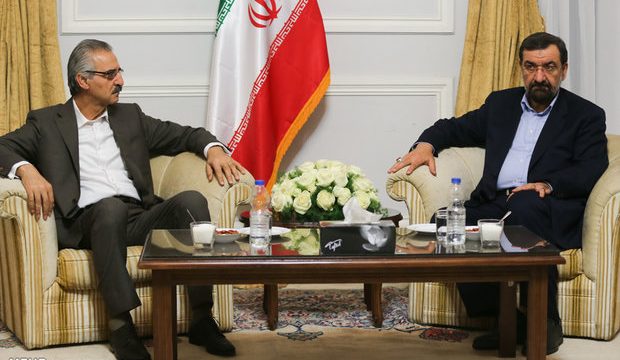 Speaking at a meeting with visiting delegation of Patriotic Union of Kurdistan (PUK) on Sunday, Rezaei emphasized that Iran, on the other hand, treats Kurds of all countries with complete respect.

The senior Iranian official further said “we had a battle with democrat forces in Marivan while PUK’s ties with the Islamic Republic are far better than other groups and need to be expanded.”

“PUK holds excellent capacities due to its humane and prominent figures and its ties with Iran have remained stable over the past five decades,” Rezaei noted.

He also stated that the first Iraqi president was chosen from among one of PUK figures denoting the union’s positive political background.

The official urged PUK members to maintain unity in order to prevent harm to all individuals; “the oppressed people of Iraq are eying your performance which has so far been worth appreciable both in the fight against Saddam as well as the combat against ISIL terrorists.”

Secretary of Iran’s Expediency Council Mohsen also admired the strategic relations between PUK and Ammar al-Hakim, Leads of Islamic Supreme Council of Iraq, which led to formation of the Iraqi government.

Early into the meeting, Mola Bakhtiyar, a senior figure with the Patriotic Union of Kurdistan, voiced satisfaction towards the visit to Iran; “over the past thirty years, Iran and PUK have cooperated in the fight agaisnt common enemies like Ba’ath Party and ISIL.”

“Resistance would have been made impossible in the absence of these collaborations,” he underscored.

Mola Bakhtiyar voiced readiness to fully cooperate with Iran in the fight against ISIL terrorists; “we held no doubts in the efforts to eliminate ISIL group and Kurdish Peshmerga are still in the frontline of the war.”

“ISIL is bound to defeat and PUK will maintain its constructive ties with Iran even after terrorists are stamped out,” he commented.

The visiting official also underscored that “PUK Leader Jalal Talebani calls for continuous relations between Iran and the union.” “Our ties with Iraqi Shias are also strategic ones rather than tactical.”

He also urged Rezaei, as an influential figure in IRGC who has always backed Iraqi Kurdistan, to convey their greetings to the Iranian Leader.

“We followed up the issues related to tensions between some Kurdish forces and the Islamic Republic,” said Bakhtiyar asserting that “no effort will be spared to sustain good relations between Iran and Kurds as they picture a promising future for the region.”

The PUK member pointed to the presence of millions of Kurds inside the region who cannot be ignored; “our ties have developed significantly and possible changes in the region’s geopolitics would preserve Iran’s interests and security.”

Also at the meeting, member of PUK Political Bureau Executive Body Omer Fatah said “we consider Iran’s enemies as threats to ourselves and will continue collaborations with the Islamic Republic.”

“At time, we remain bereft of international aids due to our vicinity to Iran,” stressed the official adding “we are eager to enjoy the support of Iran as a great defender since our people are in poor conditions.”