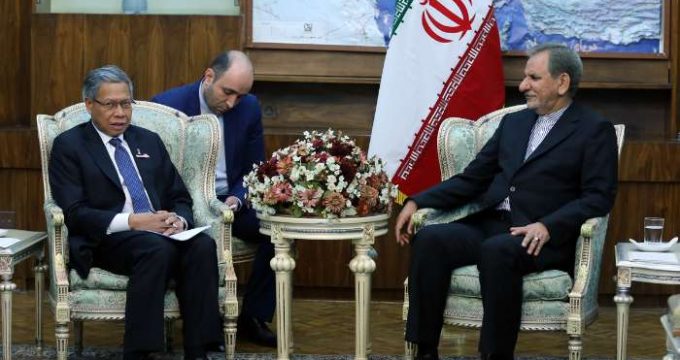 Jahangiri: Banking ties must be regulated to boost trade with Malaysia

Without removal of difficulty in banking ties, restoring the economic ties will not be possible and that the banking ties should be regulated at the earliest to ease money transactions between the two countries, he said.

Jahangiri made the remarks in a meeting with visiting Malaysian Minister of International Trade and Industry Mustapa Mohamed.

Jahangiri said that Iranian president paid a visit to Malaysia in the context of the plan to enhance level of economic cooperation with Kuala Lumpur.

He expressed the hope that agreements signed between the two presidents would help boost economic ties.

Given good political relations between Iran and Malaysia, he said the two countries play significant role in the Muslim World with constructive cooperation at the international forums and that Malaysia always helps promote moderate Islam, Jahangiri said.

Malaysia in East Asia and Iran in the west and near the central Asia can create suitable opportunities for Malaysian companies to export their products and services, he said.

The Islamic Republic of Iran with a 80 million population is regarded as a very big market among countries in the region and would serve as a good guide for the Malaysian companies to take advantage of the great markets in the area, Jahangiri said.

After the sanctions were lifted as per the Joint Comprehensive Plan of Action (JCPOA), there exists very huge economic potentials in Iran and the economic delegations from different countries have visited Iran and voiced readiness to broaden economic cooperation, so that the share of Asian and the Muslim countries is high, he said.

Iran and Malaysia cooperate in various fields such as oil, gas, energy, petrochemical industry, science and technology and academic areas and can explore new grounds of cooperation in other fields, he said.

Private sector in Iran has a very good share in commerce and industry and are eager to broaden ties and cooperation with the Malaysian companies, he said.

Role of Iran and Malaysia Joint Economic Commission to explore the grounds for cooperation is of prime importance, Jahangiri said adding that it is expected the current hurdles to be removed to deepen such ties and cooperation more than before.

Iran and Malaysia can bolster mutual and regional cooperation, he underlined.

Malaysian minister, for his part said Malaysia attaches importance to expansion of cooperation with Iran in oil, gas as well as infrastructure.

Malaysia has spared no efforts to promote peace and prosperity among other nations, he said.

He expressed the hope that removal of banking problems would lead to expansion of cooperation in oil, gas, carmaking, science and technology and academic areas.