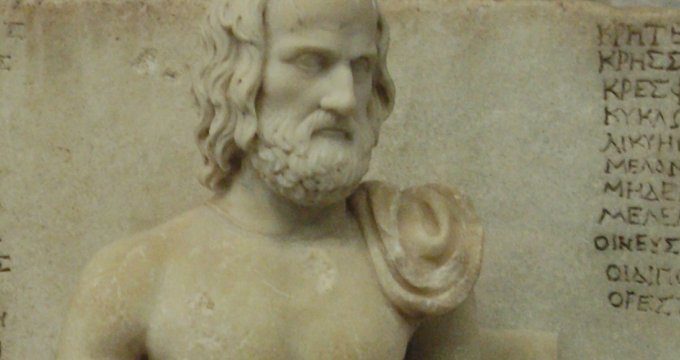 Literary translator Abdollah Kowsari, 69, has brought out the Persian translation of five seminal works by Euripides (480-406 BC), a tragedian of classical Athens.

Kowsari’s book is titled Euripides. The 556-page work has been published by the Tehran-based Nashreney Publications.

The book includes five of the most celebrated plays written by Euripides: Medea (431 BC), Hippolytus (428 BC), Electra (mid-410s BC), The Trojan Women (415 BC) and Bacchae written in his final years in Macedonia, the Persian daily Sharq reported.

“Publishing this selection of Euripides’ plays has been among my oldest wishes,” Kowsari said in the preface of the book. It was Shahrokh Meskoub (1924-2005), the Iranian writer, scholar and translator “who brought Greek tragedies to our knowledge for the first time. Our generation came to know the Greek tragedies through Meskoub’s translations.”

And it was Meskoub who wrote Kowsari a letter encouraging him to translate all the Greek tragedies that he could. The literary attempts by Meskoub’s generation were sporadic.

After about 30 years of research, Kowsari is now convinced that the tragedies included in the book are among the most significant achievements of human thought and imagination.

Kowsari went through numerous translations, interpretations and critical appraisals, and finally selected the five plays out of the 19 works of Euripides that remain.

The translations are in verse, using the diverse techniques of New Poetry founded by Nima Youshij (1895-1960) as Kowsari believes that the tragedies demand “a verse translation because they are originally in verse.”

“All the tragedies, available to us, comprise a limited corpus. They include seven by Aeschylus (525-456 BC), seven by Sophocles (497-406 BC) and 16 tragedies by Euripides; while some 90 tragedies are said to have been written by each of the ancient poets,” Kowsari said.

Considering the requirements of the book market, it was not justifiable to translate and publish Euripides’s 16 tragedies all at once. This is a job better done in due time.

“Euripides’s concepts and characters are down-to-earth, but he conducts a wonderful exploration into the psychology of his characters. He has thus created a turning point in tragedy writing approach, making it more understandable for the modern man. The English translations of Euripides’s works by British poet and novelist Paul Roche (1916-2007) are relatively new, but remain in the form of beautiful poem. So I took Roche’s translation as the basis of my work.”

But for Hippolytus, Kowsari followed the English translation by Philip Vellacott (1907-1997), an English classical scholar known for his numerous translations of Greek tragedy. Published by Penguin Books, Vellacott’s was the liveliest translation, Kowsari said.

“In the process of translation, what concerned me most was bringing it out in proper language. I didn’t think about the actors performing the play or articulating what I translated. But it will be to my great delight and honor if my translations are used on stage.”