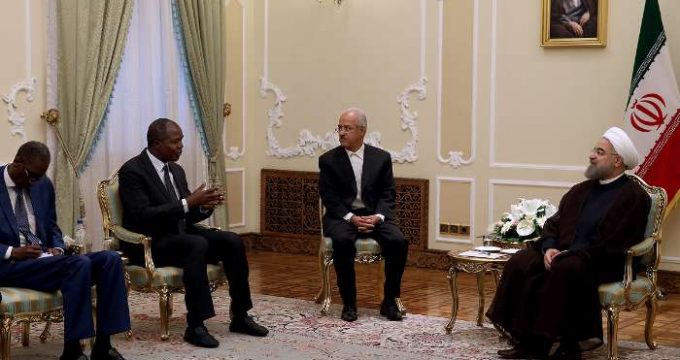 President Rouhani and Mr. Abdallah Albert Toikeusse Mabri sat on Monday to discuss economic relations and the possibilities of better ties after JCPOA brought a modicum of hope for Iran’s economy. Located in western African coasts of the Atlantic, the country has huge potentials to be a market for Iranian goods and services including Iran’s auto-making industry.

Mr. Rouhani told the meeting that in recent years, there had been some dynamism to bring new highs to bilateral ties, with Iran providing Côte d’Ivoire with engineering and technical services along with Tehran’s welcoming of construction projects in West African country. “A joint commission should be established to address all these potentials and future plans and to reactivate the capacities otherwise abandoned to desuetude,” he told the meeting.

Rouhani also believed Iran and Côte d’Ivoire would work to curb terrorism and extremism, where the efforts should be joined by all countries involved, to address the economic and cultural roots and contributors of terrorism; “however, the guiding principle should be an avoidance of interference in internal affairs of sovereign nations; the current atrocities in the name of Islam has nothing to do with Islam, since the religion preaches peaceful symbiosis, while terrorists horrify nations and kills innocent civilians indiscriminately according to drastic reading of the scriptures they provide,” he emphasized.

Mr. Mabri for his part congratulated Iran for its success in clinching a nuclear deal with the 5+1 as an achievement for the Islamic world as well; “Iran is a great regional power especially in economics and in its influence exercised in the region; we hope to establish a joint commission by the first quarter of 2017 in Abidjan; Iran would be a great partner for us in energy and banking, with human rights, drug fights, agriculture, and science and technology in queue for improvements,” he concluded.