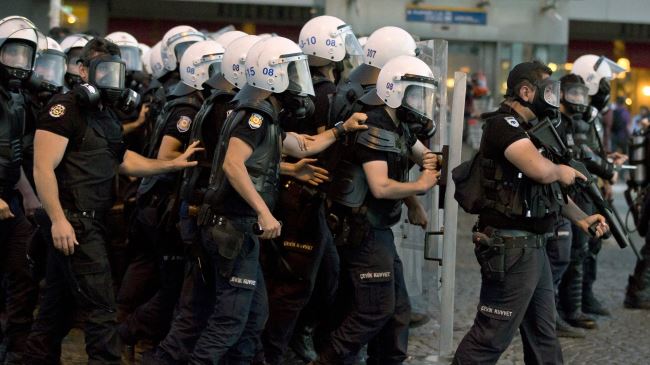 Turkish police forces have engaged in clashes with hundreds of pro-Kurdish activists trying to reach the main train station in the capital, Ankara, to commemorate the victims of last year’s twin bomb blasts.

On Monday, lines of police and water cannon trucks blocked roads leading to the station as demonstrators, carrying placards and flags, sought to march to the site.

A crowd of more than 150 people chanted “murderous state” when people refused to let them through.

Police then fired tear gas canisters and plastic bullets to disperse the protesters, some of whom hurled bottles and stones in return.

Some of the demonstrators were struck by police truncheons, while some others covered their mouths to avoid breathing difficulties.

When people were about to observe silence at the exact time of the attack at 10:04 local time in tribute to the victims, the crowd gave a loud ovation and pledged not to allow the tragedy to be forgotten.

On October 10, 2015, 103 people lost their lives, when two bombers believed to be affiliated to the Takfiri Daesh terrorist group blew themselves up during a gathering of pro-Kurdish activists.

Nearly 500 people also sustained injuries, with some of them still receiving treatment.

Families and relatives of the victims are deeply frustrated by the slow progress of the investigation and the judiciary’s failure to bring a single person to justice over the attack.

Turkey has time and again been accused of being one of the main supporters of the militant groups operating in Syria, with reports saying that Ankara actively trains and arms the Takfiri terrorists there and facilitates their safe passage into the conflict-ridden Arab country.

Analysts believe that the activities of Daesh inside Turkey seem to be an inevitable side-effect of support for the militants in Syria.