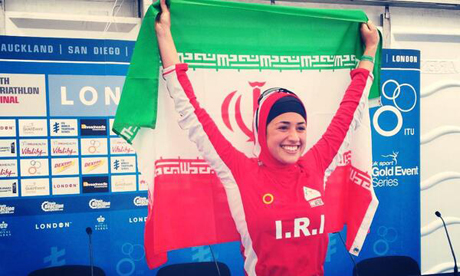 KAILUA-KONA, HAWAII – On Tuesday, just four days before the start of the 2016 Ironman World Championship, competitors from around the globe were settling in to Hawaii’s heat and humidity. Some took time to relax and enjoy the scenery, while others made sure to get in a pre-race practice swim or ride.

“This will be the first time a female will be officially representing Iran in an Ironman,” says Gerami, 26, who also will be making her U.S. debut. “What was important to me was to create an opportunity where all women could access triathlons, to reap the psychological, physical and social benefits of sports—to swim, bike, run, immerse in nature and grow as a person. I believe what is most important is to have the opportunity.”

By representing her country and respecting Islamic culture, Gerami agreed to respect the rules and regulations of Iran, which requires women to be covered in public settings. She’ll be sporting clothing that will cover her entire body, apart from her hands and face.

“I believe clothes offering full body covering aren’t necessarily a hindrance,” Gerami says. “In a day and age of such advanced technology and skills, there is bound to be a solution that would cover the body, but would not put the athlete at a performance disadvantage. I am super curious to know where this clothing journey will ultimately take me.”

One thing’s for sure: this expedition will take Gerami on a path that will ultimately change the way women of Islamic faith approach—and are permitted to approach—sport, especially triathlon.

“The journey to Ironman Kona has been real life,” Gerami says. “It’s been a journey where I have been touched very deeply and [I’m] extremely humbled by the support everyone has shown along the way. It has deepened my faith in the kindness, light and beauty in all human beings.”

But Gerami has more in mind than just helping to eliminate a cultural divide. She’s hoping that her garments will help to inspire women who may have other complications in regard to body exposure, including personal and health ailments.
FinisherPix
“My hope is that by finding the right solution, the clothes would then provide an opportunity for more women to access sports,” Gerami says. “Women who prefer to cover in order to respect religious or cultural values, personal modesty, body confidence issues, health and skin problems, [or] sun protection.”

According to Gerami, triathlon is a relatively new sport in Iran and even though men are authorized to compete, their problem lies within race logistics.

“For men, it’s not so much the question of obtaining permission to do triathlons, but the challenge lies in having access to good facilities, knowledge and coaching, funding, racing opportunities and experience—all that is needed to develop a sport in a place where it previously did not exist,” she says.

EDGE
Previewing the 2016 Ironman World Championship in Hawaii
Sharing in Gerami’s cultural greatness is eight-time Ironman champ, Paula Newby-Fraser. Her role, rather than being a coach, is as a mentor, who reminds Gerami about the reality associated with being the focus of attention. Newby-Fraser encourages her to verbalize her feelings on her Ironman quest.
FinisherPix
“What I’m learning on a daily basis is just how much the journey she has undertaken into mainstream triathlon is such a new territory for everyone,” Newby-Fraser says. “Culturally, I am ashamed to admit that we are very naïve and ignorant in our understanding and appreciation of her heritage, and, yes, have been broadly lazy to make the effort to truly understand.”

Newby-Fraser credits Gerami as being an individual who has the power to teach the world about objectives that are sometimes described as broad, unknown and unclear.

“People are always inspired and positive about what she is trying to achieve, but the doing and real action is quite different,” Newby-Fraser says. “[The] calls, letters, sitting around embassies, facing the realities of moving around the world with deadlines, being caught in bureaucracies, [and] realizing that verbal support to help does not necessarily mean actually investing time, real resources and energy. By no means is this a negative—it’s just the reality, and we have slowly but surely found a way to keep moving forward.”

FinisherPix
But for Newby-Fraser, the ride with Gerami has been awe-inspiring and humbling. “I’m 54 years old,” Newby-Fraser says. “To feel and engage with the idealism and unjaded dreams and energy of a young woman in this day and age, I love [it] so much. It has been a gift.”

As Saturday’s world championship approaches, Gerami looks to do the unthinkable—to triumph on a stage that goes far beyond medals of accomplishment.

“For me, sports have always symbolized the unity of people in hard work, hopes and aspirations,” Gerami says. “The bringing together of people from different walks of life in harmony, friendship and respect for each other—the celebration of the beauty in our diversity, and showcasing the best qualities of mankind.”