A Look at Iranian Newspaper Front Pages on October 8

Newspapers on Saturday covered the remarks made by IRGC Quds Force Commander General Qassem Soleimani about Iran’s role in Syria.

The possibility of a clash between Russia and US in Syria also received great coverage.

1- IRGC Commander: We’ll Crush Our Enemies in Case of Any Aggression 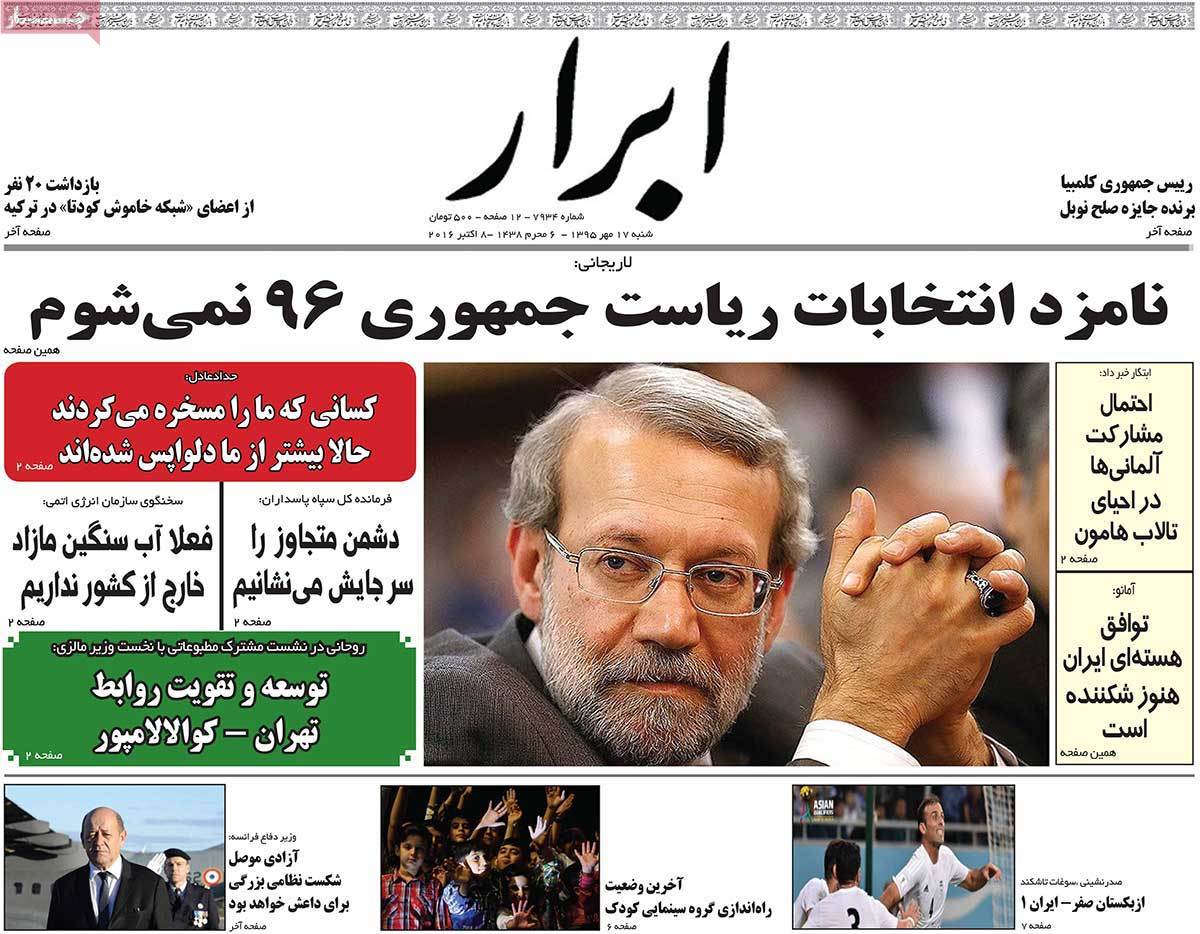 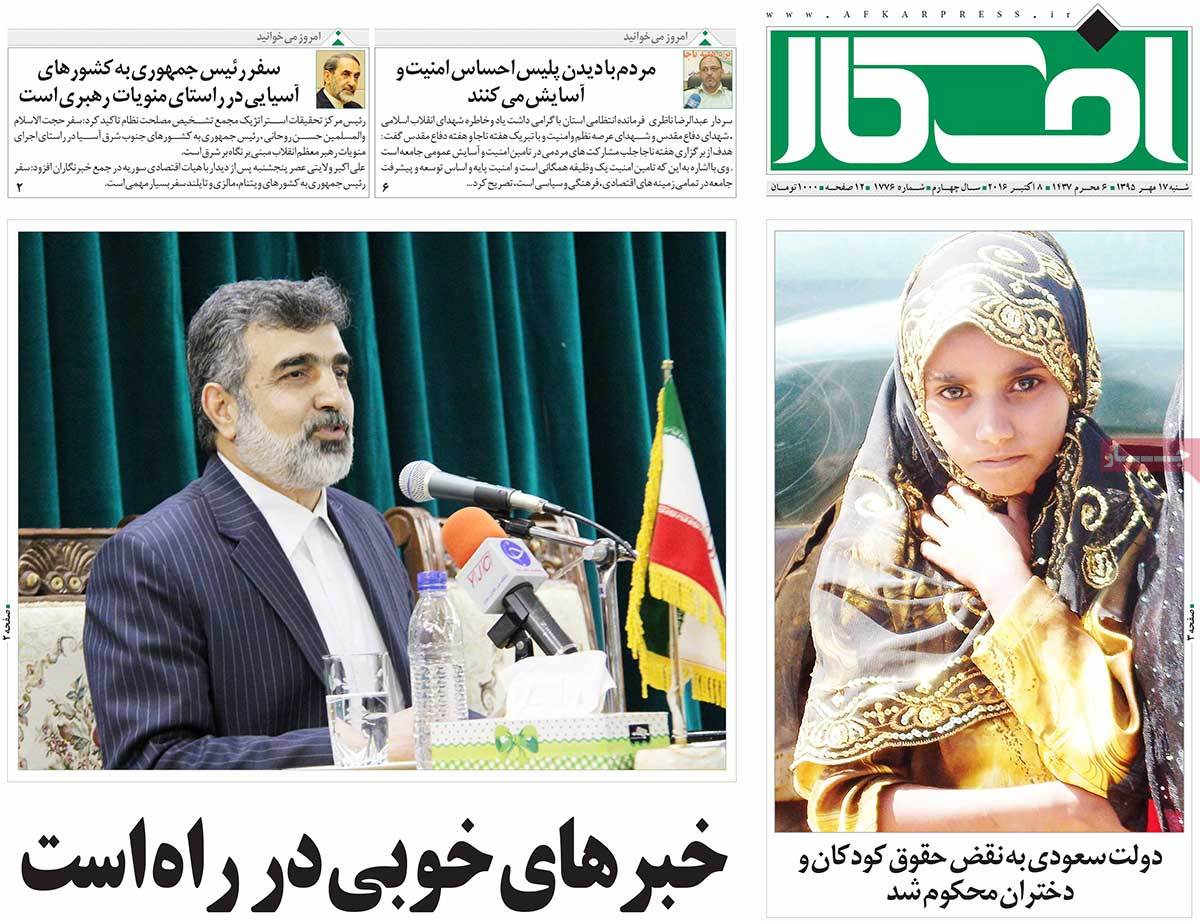 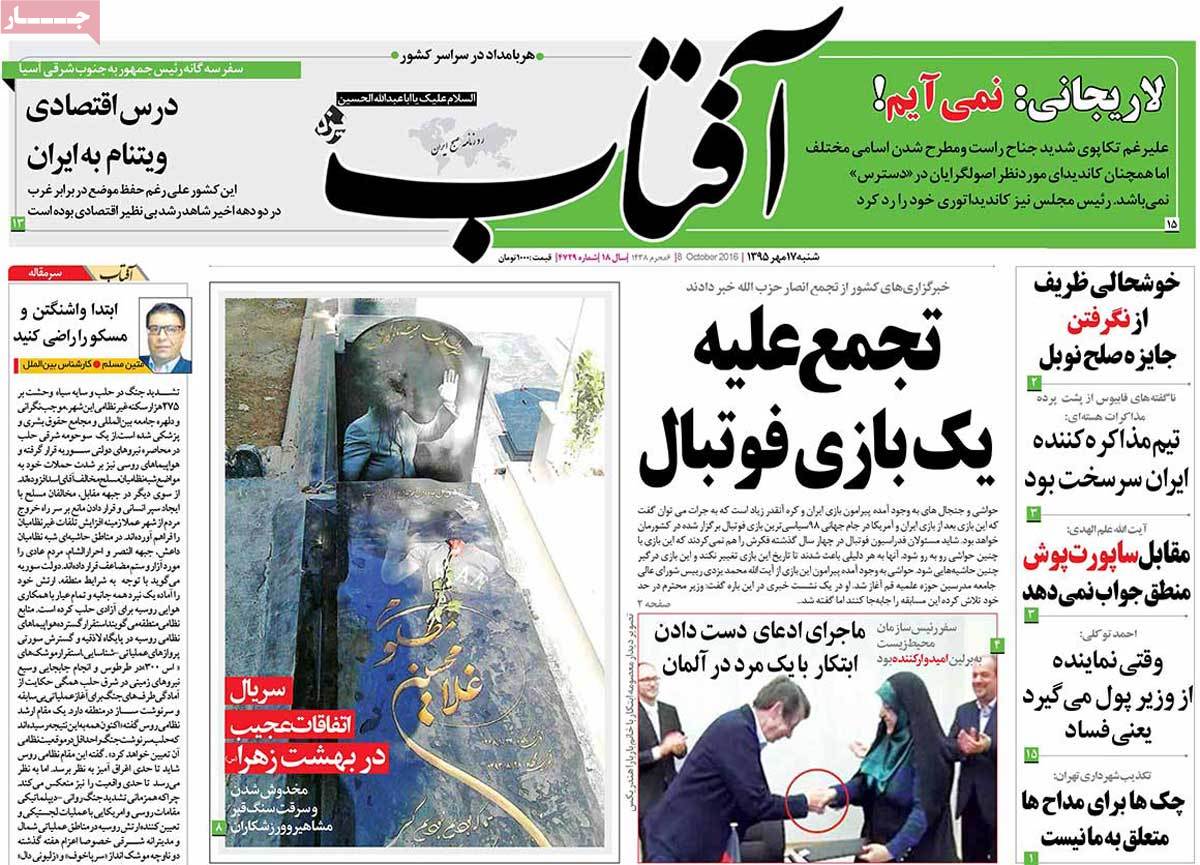 1- Tehran Mayor Has More Power than the President

4- Sale of Newly-Born Babies at Alarming Level: Triplets in Arak Put Up for Auction 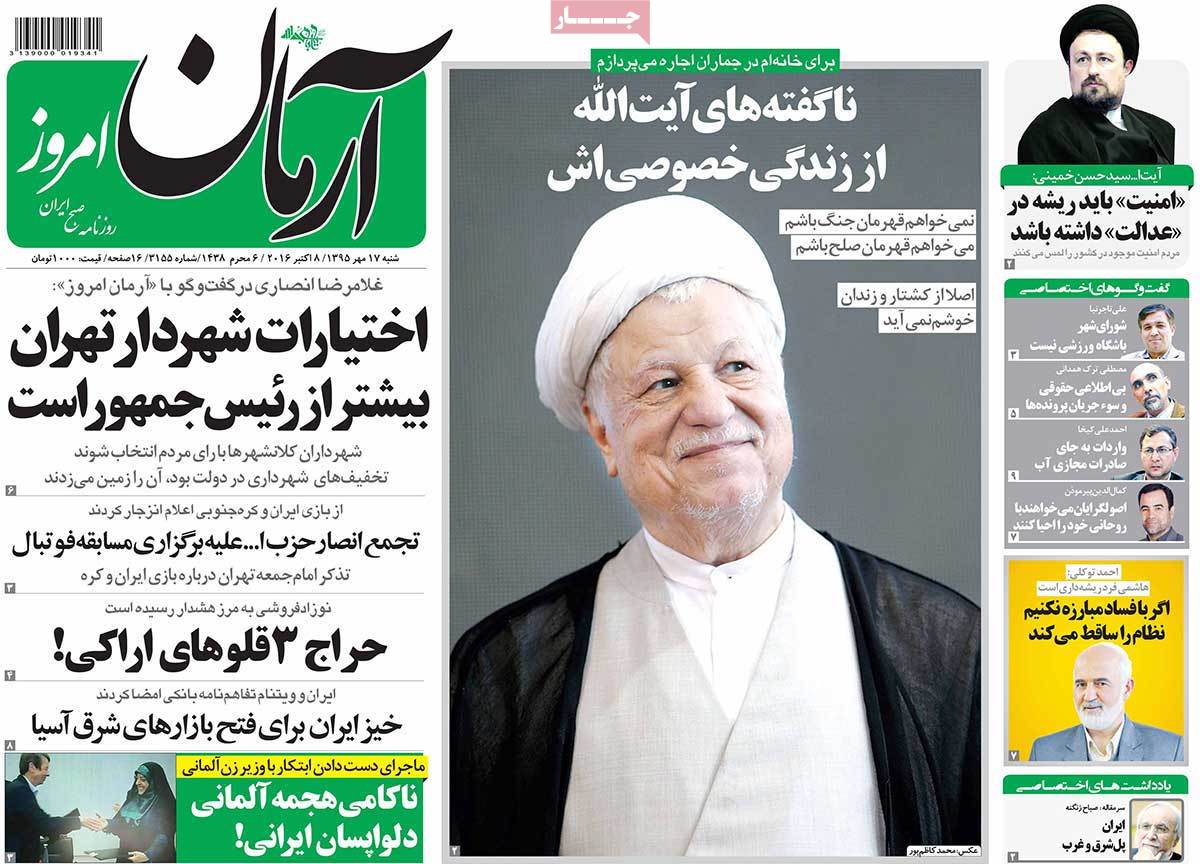 2- General Soleimani: ISIS and Takfiris Were Created to Target Iran

1- Turkish Ambassador to Tehran in Interview with Etemad: We’ve Offered to Mediate between Iran and Saudi Arabia; Erdogan Tried to Resolve Tehran-Riyadh Conflicts in Separate Meetings with Rouhani and King Salman

3- If We Don’t Fight Corruption, the Islamic Republic Will Be Overthrown: Former MP Tavakkoli 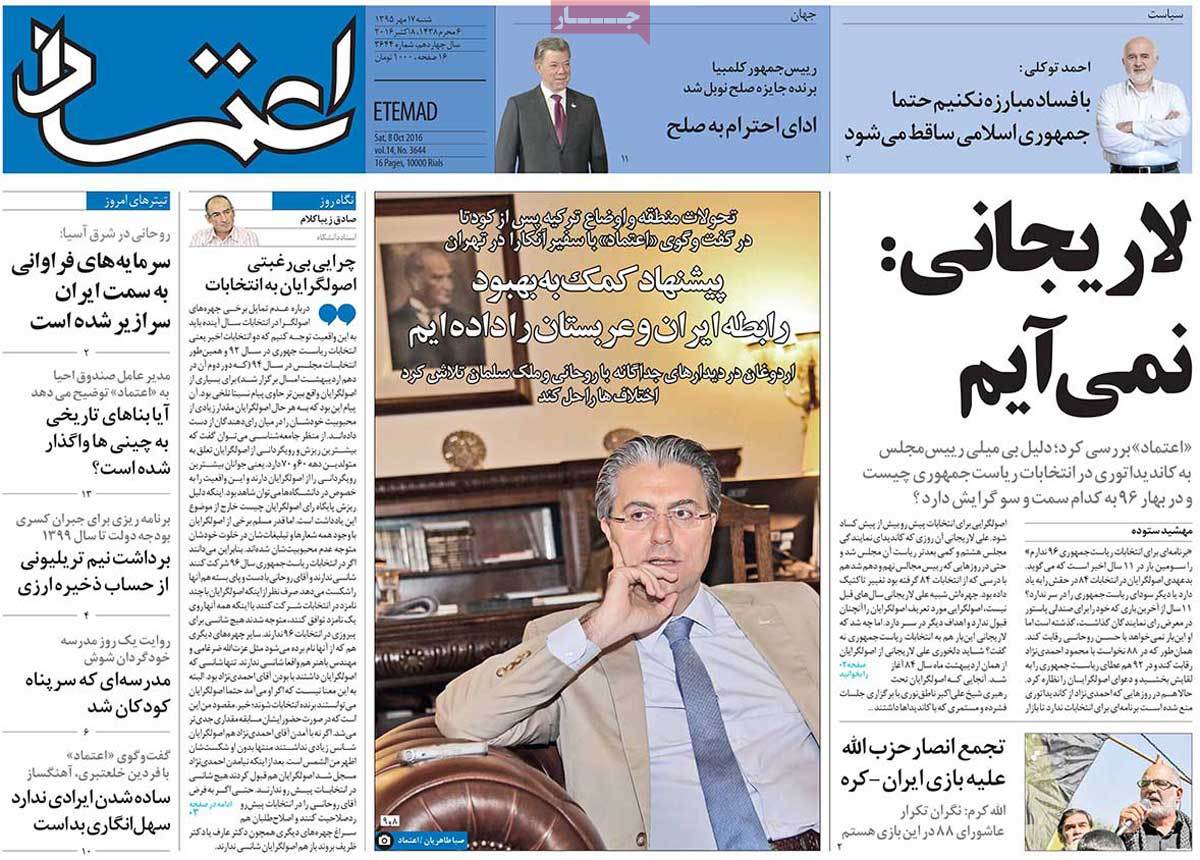 3- Moscow: US Attack on Syria Army Will Face Russia’s Reaction 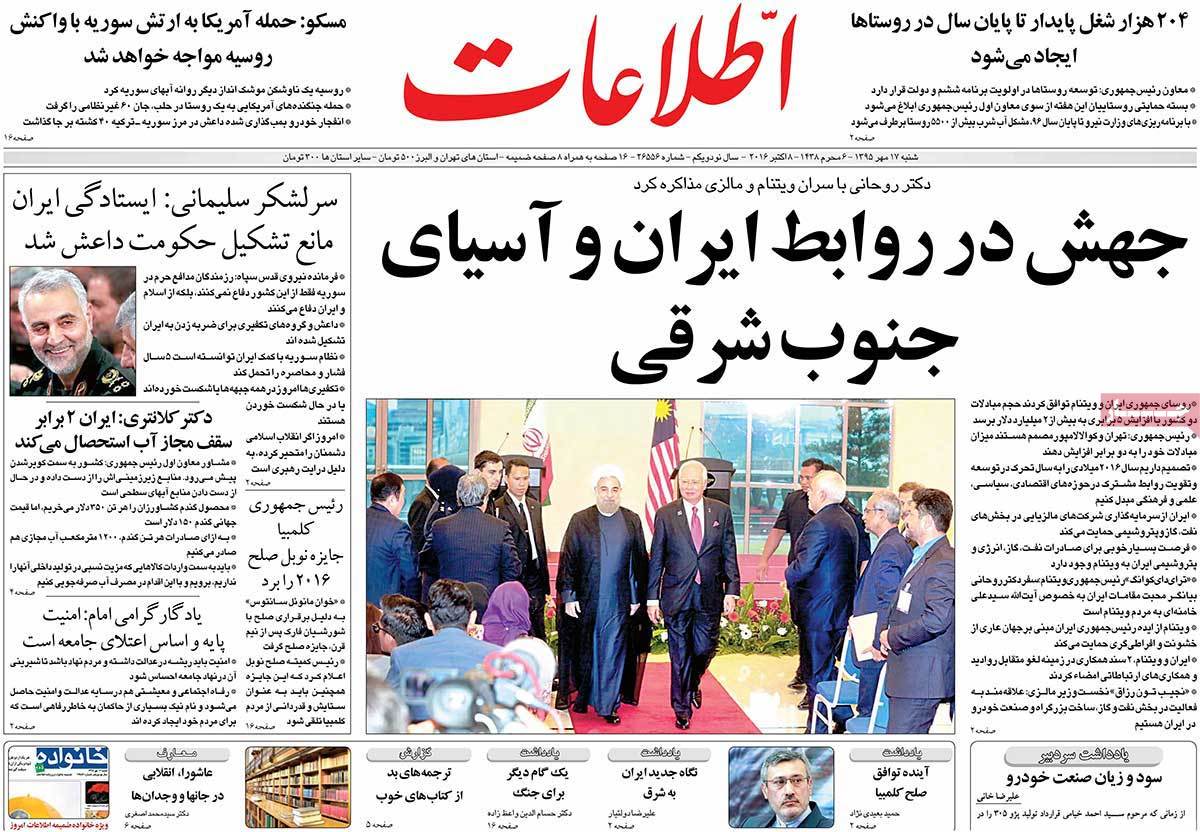 2- Economy Minister: We Wasted Our Money by Paying Cash Subsidies 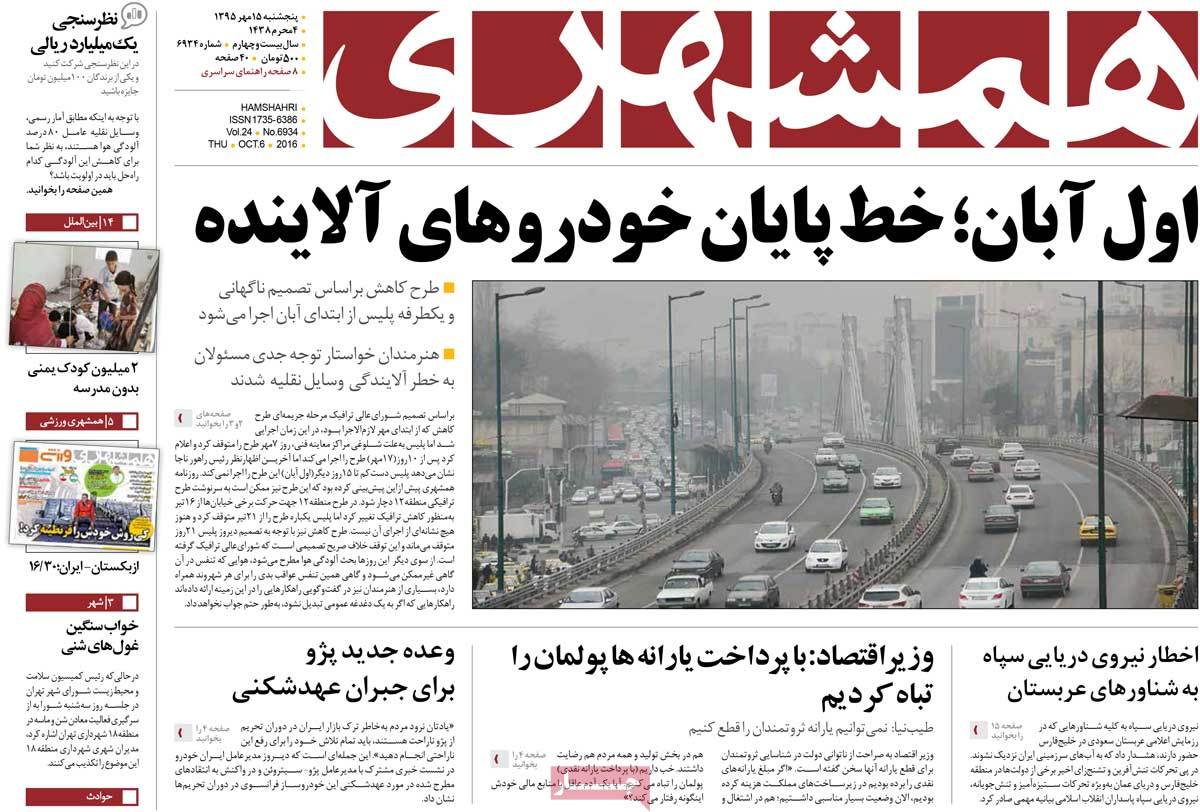 2- EU Ratifies Draft Text of Strategic Document: We’re Interested in Developing Our Economic Cooperation with Iran and Lifting the Sanctions 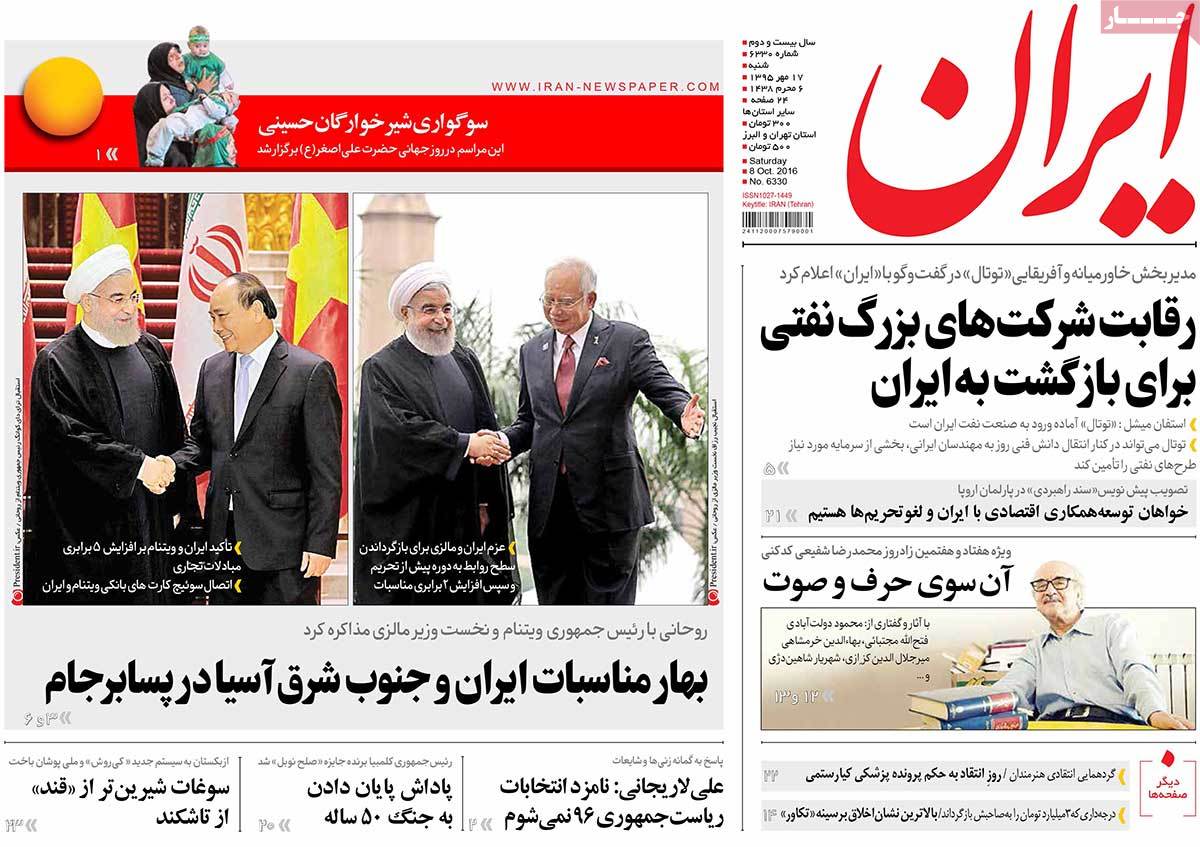 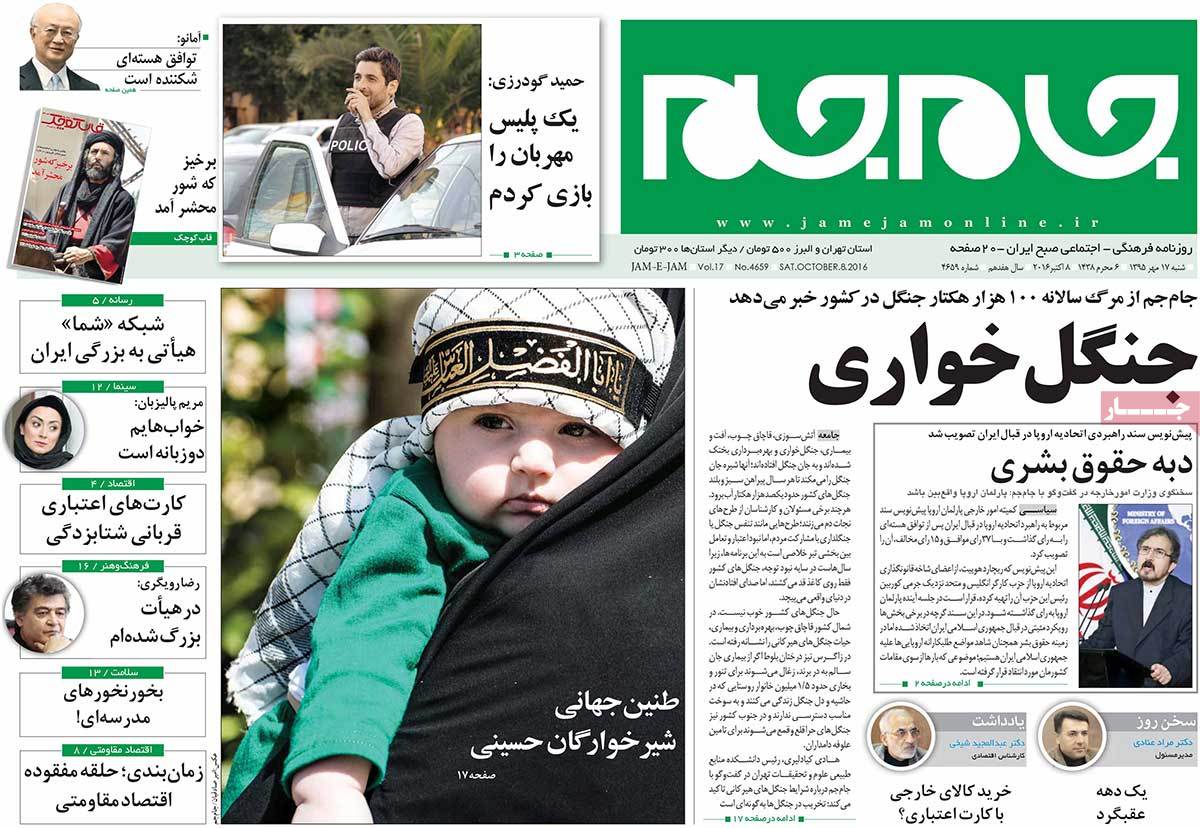 1- Renault: Iranian Car Makers Pressure Us for Selling Our Cars in Higher Prices

1- EU Preparing for All-Out Expansion of Ties with Iran

1- Russia’s Unprecedented Threat against US: We’ll Answer Any Attack on Syria with Our S-400 System; Our Experts Don’t Have Enough Time to Identify the Planes: We’ll Shoot Down All Fighter Jets

2- Vietnam President: Courage and Resistance of Iranian Nation Is Admirable for Nation and Gov’t of Vietnam

3- Deal between IDRO and Renault Is against Iran’s Constitution 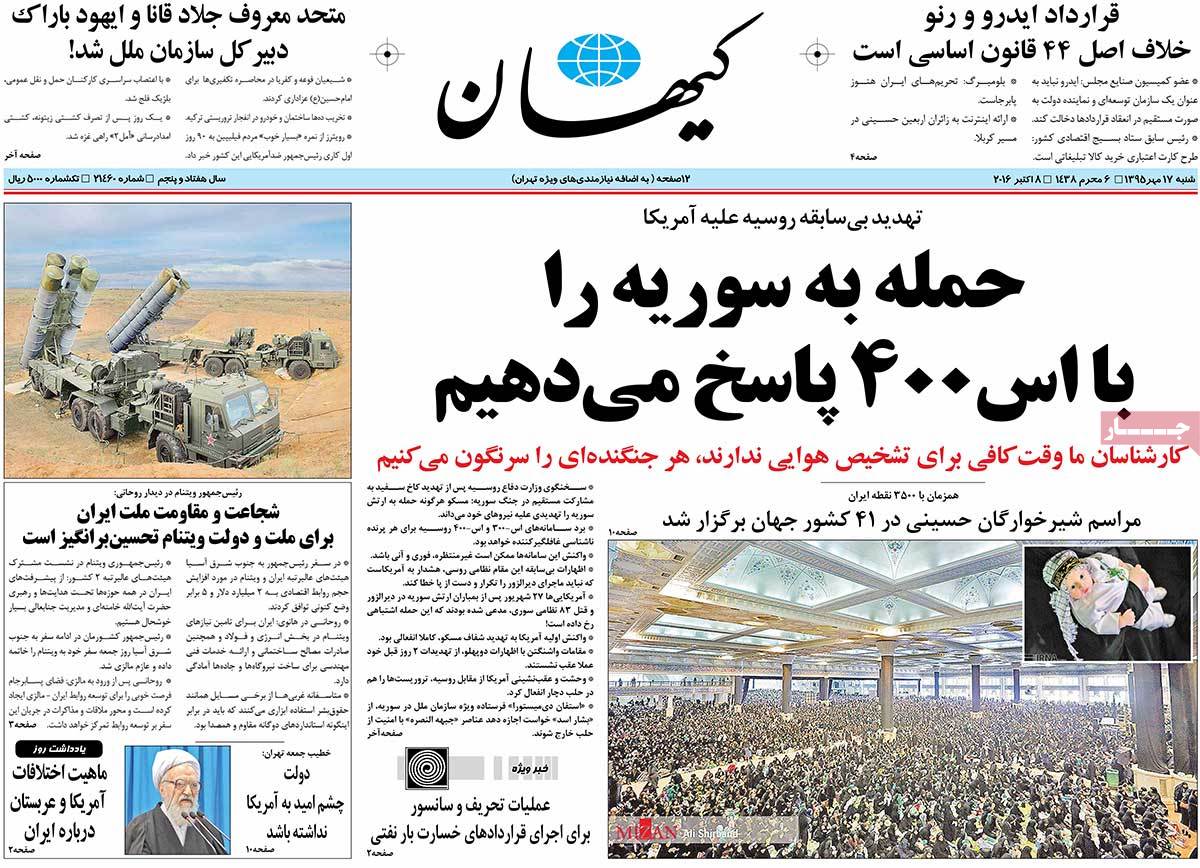 1- General Soleimani Says ISIS Was Created for Iran, Not for Syria 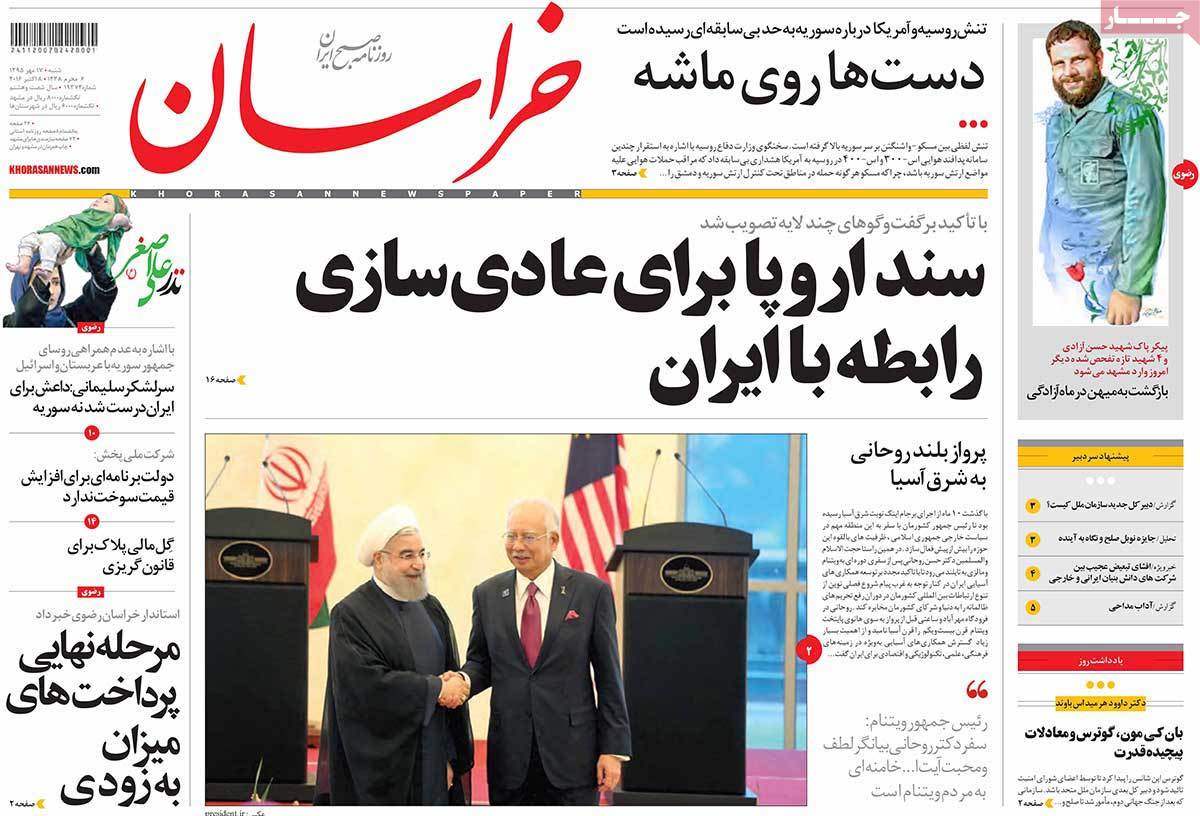 2- AEOI Spokesman: We Produce 20 Tons of Heavy Water Each Year

2- Good Nuclear News Will Be Released: Deputy Head of AEOI 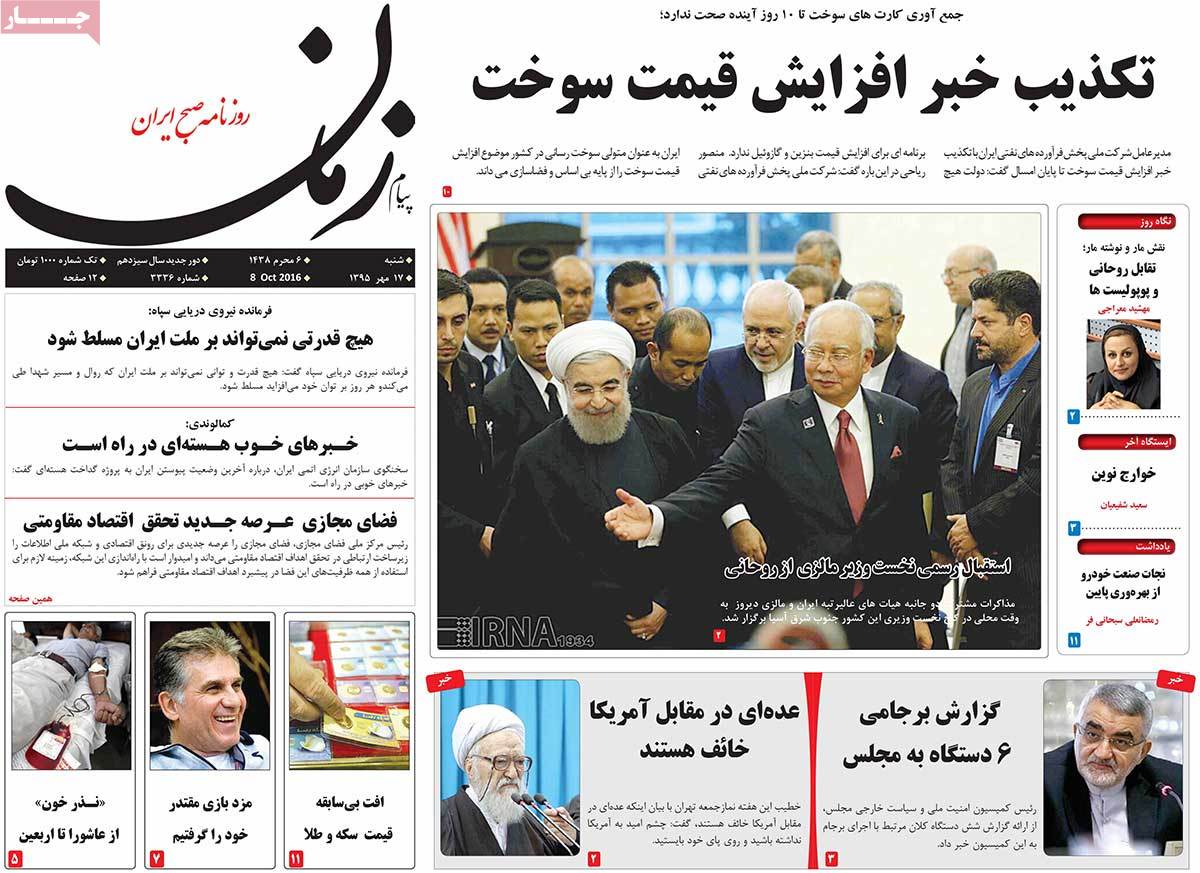 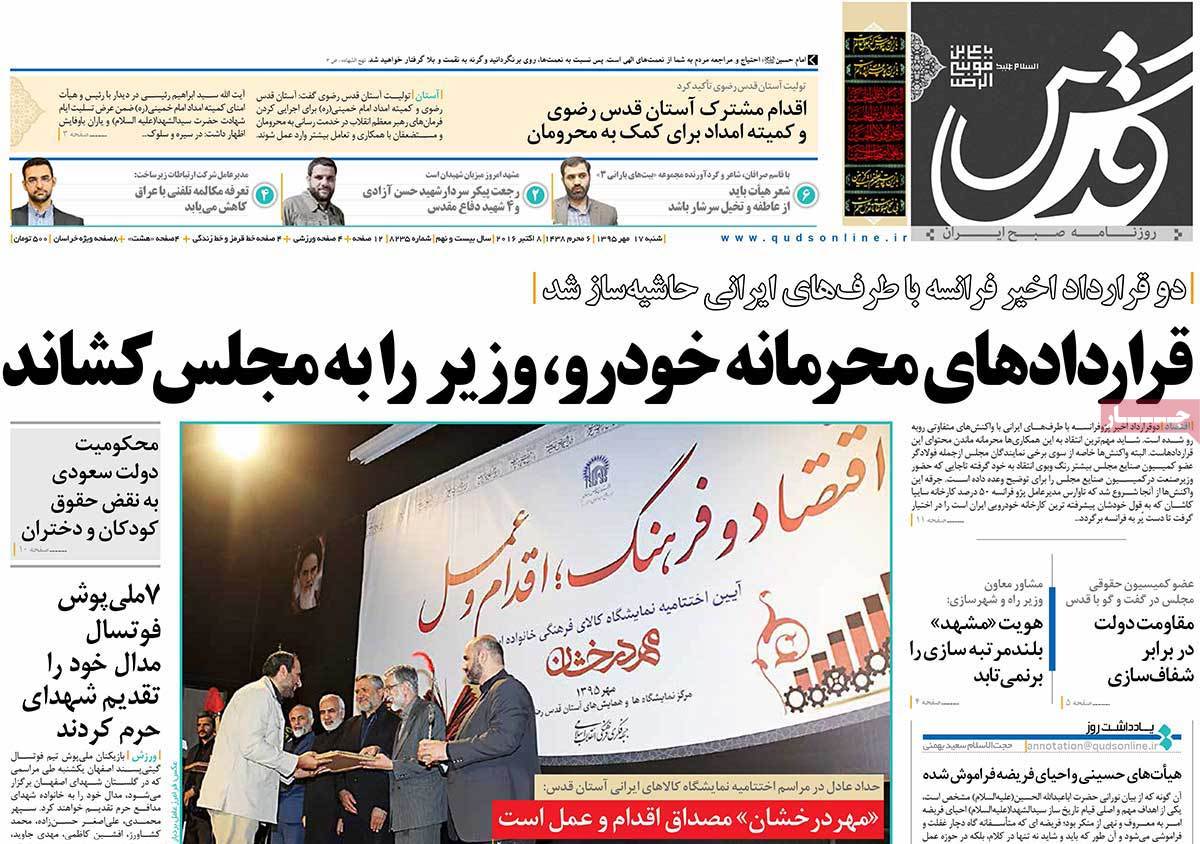 1- Rouhani: We’ll Turn 2016 into the Year of Movement in Development of Tehran-Kuala Lampur Ties

2- Ugly Phenomenon of Scrawling on Historical Monuments: Should Historical Sites Be Given to Private Sector? 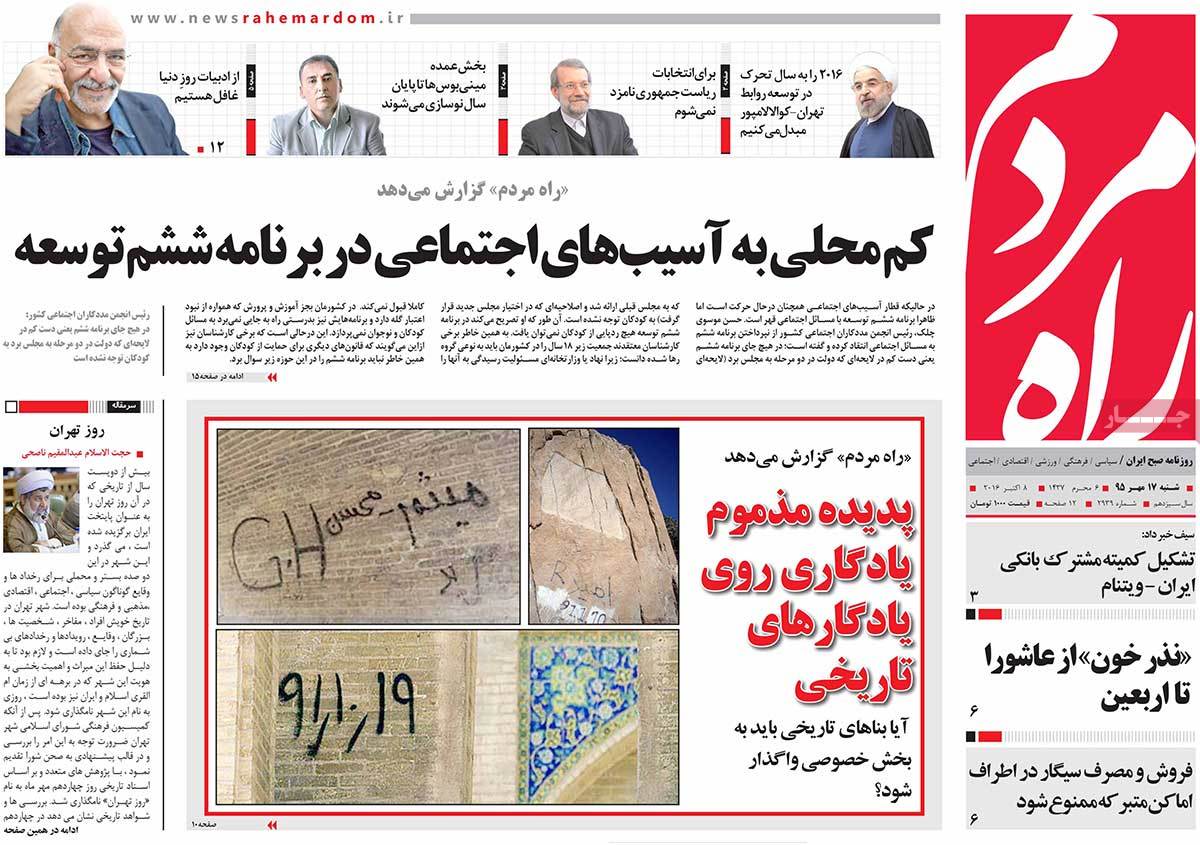 1- Amir Abdollahian: US Has Failed to Manage the Gam in Aleppo in Favour of Terrorists

2- Senior Cleric: Government Should Not Be Optimistic about US

1- A New Book Published about Ayatollah Rafsanjani: I Want to Be Champion of Peace 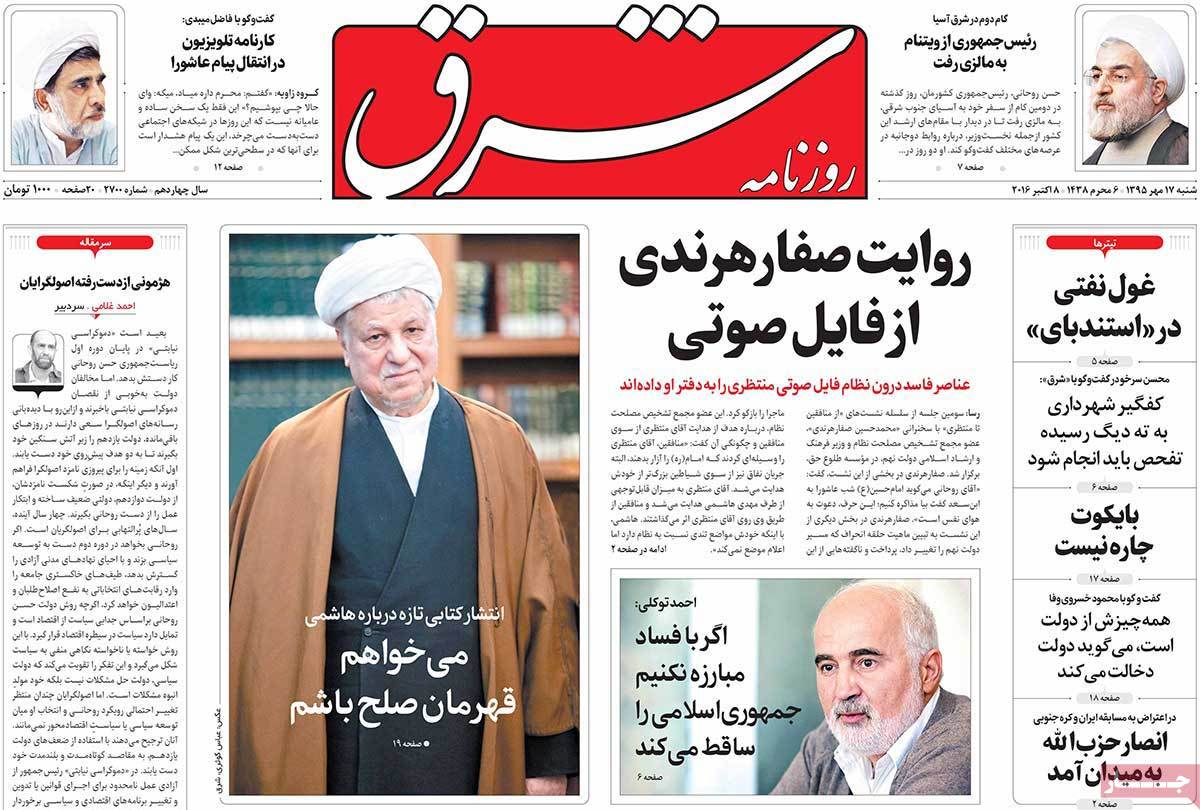 1- Iranians Gripped by Obesity, Diabetes, and Lack of Movement: Age for Heart Attacks and Strokes in Iran 10 Years Less than World Average

1- General Soleimani: Saudi Arabia’s Deputy Crown Prince Is Too Hasty and May Even Kill Their Own King 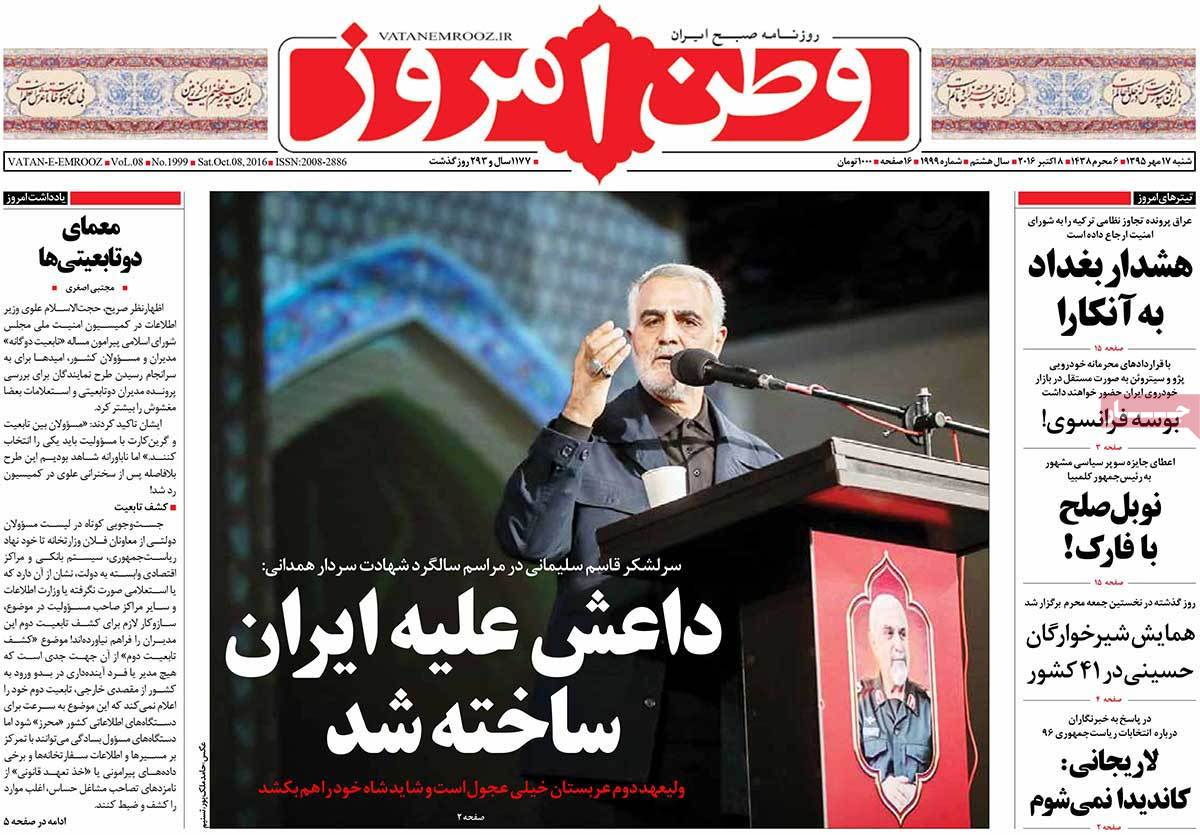