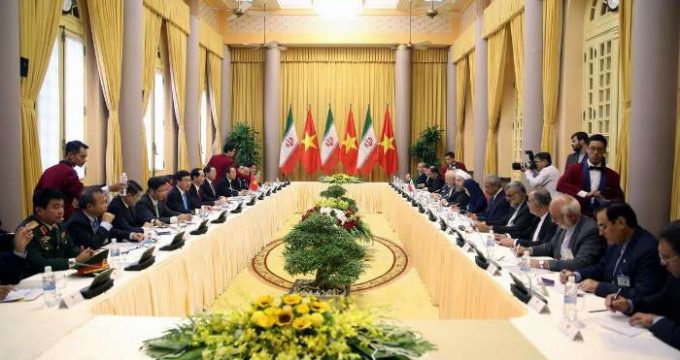 “Vietnam can be a center for the development of Iran’s economic activity in East Asia,” President Rouhani said during a meeting with Vietnam Prime Minister Nguyen Xuan Phuc in the capital Hanoi on Thursday.

Heading a high-ranking delegation of political and economic officials, President Rouhani on Wednesday embarked on a tour of Southeast Asia. After Vietnam, he will visit Malaysia and Thailand, where he will participate in the 2nd Asia Cooperation Dialogue (ACD) Summit.

He added that Iran can also be Vietnam’s “trade route” in a market with 400 million population.

The removal of anti-Tehran sanctions has provided a great opportunity for cooperation between the two nations in business and economic fields, Rouhani further said, calling for enhanced banking and financial ties between Tehran and Hanoi.

The sanctions were lifted after Tehran and the Group 5+1 (Russia, China, the US, Britain, France and Germany), known as the Joint Comprehensive Plan of Action (JCPOA), on July 14, 2015 and started implementing it on January 16.

President Rouhani further expressed the Islamic Republic of Iran’s preparedness to supply Vietnam with its required energy and steel, saying, “Appropriate facilities should be provided to pave the grounds for joint cooperation between private sectors of the two countries”.

Xuan Phuc, for his part, underlined his country’s resolve for boosting ties with Iran in various spheres and said, “The two countries have great potential to boost their cooperation, which will benefit both nations”.

Iran opened an embassy in Hanoi in 1991 and Vietnam opened its embassy in Tehran in 1997. They established relations in 1973 and since then the two countries have increased political and economic cooperation through exchange of visits by senior officials from both sides.