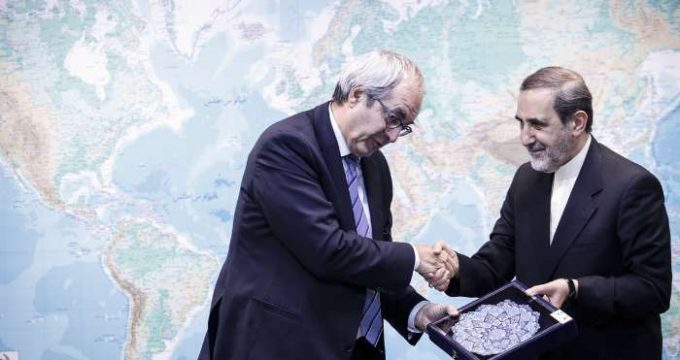 Velayati: Syrian crisis to be resolved by respecting public demands

Tehran, Oct 2, IRNA – Head of the Strategic Research Center of the Expediency Council Ali-Akbar Velayati said on Sunday that Syria is not to be isolated under any circumstances and the only way to resolve the country’s crisis is to respect public demands and maintain the country’s territorial integrity.

Velayati made the remark in a meeting with visiting Head of Belgian Parliament’s Foreign Relations Committee Derek Vander Molen in Tehran on Sunday.

Iran and Belgium have experienced two centuries of amicable relations and Iranian officials at the foreign ministry attach priority to expansion of relations with Belgium, Velayati said.

Countries supporting terrorism and those creating takfiri and terrorist groups in the region have fallen trap of their miscalculation and it will not be easy to get rid of this situation, he said.

These governments never assumed that the Syrian people and its legal government will resist six months against aggression of aliens, he said.

What the Americans did in Deir ez-Zor of Iraq was a grave mistake led to assassination of innocent civilians, he said.

The visiting Head of Belgian Parliament’s Foreign Relations Committee, for his part said to resolve the Syrian crisis a big coalition under leadership of the UN should be formed.

‘We know that you (Velayati) have full command on regional and international developments with invaluable experiences and believes that your views on Syrian crisis as well as other regional crisis could be very useful,’ he said.