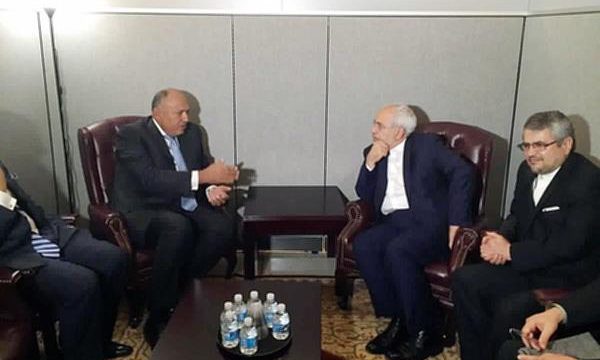 On 23 September, the Iranian and Egyptian foreign ministers met a few hours after the United Arab Emirates foreign minister addressed the Assembly and accused Iran of “interfering in Arab affairs and destabilising the region.”

The meeting was not widely covered in the major Arab media, but it was welcomed by the public. The content of the talks at the meeting was a surprise, as was the fact that the meeting took place at all as it was the first such meeting since Iranian President Hassan Rouhani came to power three years ago.

Iran has long wanted to improve its relations with Egypt. Former president Mohamed Khatami took the first steps, and his successors have also tried to find a rapprochement with Egypt. Iran has been looking for an opportunity to talk with Egypt, and it seems that it seized the chance last Friday in New York City.

In interviews with the Egyptian media Shoukri emphasised the differences between Saudi Arabia and Egypt over the crisis in Syria. “The Coalition fighting in Syria may want to change the regime in the country, but that is not Egypt’s position,” Shoukry said. “The differences [with Saudi Arabia on the Syrian crisis] do not mean we have a problem. It’s just a difference in point of view,” he added.

But not having a problem with the current government in Syria is exactly what is important for countries like Iran and Russia, meaning that there was good reason for Iran’s foreign minister to sit with his Egyptian counterpart to discuss regional issues including Syria.

Global security threats and terrorism have severely affected Egypt’s tourism industry, and they are a major concern of the Egyptian government. But while Egypt and Saudi Arabia may have disagreements over Syria, this does not mean that Egypt prefers Iran to its ally Saudi Arabia.

Now the silence has been broken, with Egypt’s foreign minister saying that the country has disagreements with Arab allies over Syria – something which is significant for Iran.

If Iran can continue its negotiations with Egypt over Syria, Egypt could also in future perhaps act as a mediator between Iran and Saudi Arabia. It would be too swift to see this happening in the near future, but the reaction of the Saudi government to the talks will indicate whether such a role is on the cards.

Iran has reduced its aggressiveness towards Egypt, born of the fact that Egypt sheltered the former shah, who is buried in Cairo. Iranian official efforts to improve relations with Egypt have not been hidden, and former Iranian president Mahmoud Ahmadinejad was the first Iranian president to visit Egypt after the Islamic Revolution in Iran in 1979.

Ahmadinejad went to Cairo for a summit meeting of the Organisation of Islamic Cooperation in 2012. Egypt is the most populous Arab country, and diplomatic relations and trade with Egypt is highly important for Iran.

Ahmadinejad also revoked the need for visas for Egyptians travelling to Iran, though Iranians still need to obtain a visa before travelling to Egypt.

Thousands of Iranians later registered with travel agents in Iran to obtain visas for Egypt. However, the deal was cancelled under former Egyptian president Mohamed Morsi, when the earlier agreement with Ahmadinejad was no longer valid.

This article was written by Camelia Entekhabifard for Weekly Ahram on Sep 29, 2016.