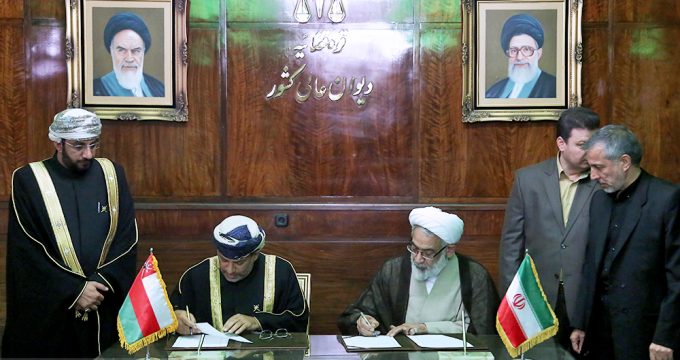 TEHRAN, Sep. 27 (MNA) – The Attorneys-General of Iran and Oman met on Tuesday in Tehran and conferred over the ways to expand legal and judicial cooperation between the two countries.

Hussain Bin Ali Bin Zahir Al Hilali, the Attorney-General of Oman, who arrived in Tehran, heading a senior judiciary delegation, met on Tuesday with his Iranian counterpart, Mohammad Jafar Montazeri and the two sides signed a memorandum of understanding (MoU) to develop bilateral cooperation on legal and judicial areas.

“Iran has taken big steps in fighting with corruption initiated in cyber space but not completely succeeded,” said the Iranian official in the meeting, “even we have opened a deputy department to monitor the issue.”

He voiced regret that the Islamic world has been targeted by the US and Zionist regime who intend to create division among Muslim countries, “they have pushed Muslim nations to commit fratricide.”

“One of the biggest harms that threatens our country and the entire world is narcotics,” stressed the Iranian Attorney-General referring to the international transit of drugs from Afghanistan to Europe, “neighborhood with Afghanistan, the producer of 95% of world’s narcotics, is a big problem for Iran.”

“Annually 45,000 legal dossiers are set up in Oman,” recounted the Omani official in the meeting for his part, “out of which one-third is resolved and two-third is referred to the attorney-general.”

The Omani attorney-general highlighted that 900 dossiers of the last 8 months have been on drug abuse and most of the narcotics involved are Heroin, marijuana, and psychedelic drugs.