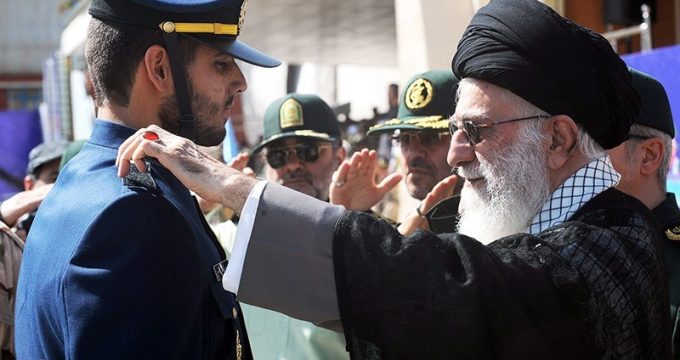 Ayatollah Khamenei was speaking during a graduation ceremony for Army cadets on Wednesday.

“Today, the Iranian nation faces a vast enemy front due to its insistence on Islam, independence and its lofty values,” said the Leader, adding that “the Armed Forces should always be prepared to play their part if the need arises.”

Ayatollah Khamenei further highlighted the sacrifices made by Iranian Army soldiers during the eight-year war imposed by the former Iraqi regime on the Islamic Republic in 1980s.

“The era of Sacred Defense served as a litmus test, in which the true essence of the Army came to light, and important and brilliant achievements were made at the hands of Army Forces,” added Ayatollah Khamenei.

The eight-year Iraqi offensive, the Leader added, was in fact “an international and all-out war waged by the world’s major powers, along with their global and regional followers, against the [country’s] frontiers and identity as well as the Islamic establishment and the Iranian nation’s [1979 Islamic] Revolution.”

Ayatollah Khamenei said Iranians, however, managed to counter all the big powers through relying on their faith and resilience.

The ceremony was held as Iran is observing the last day of the Sacred Defense week, which marks the 36th anniversary of the Iraqi war against the country.