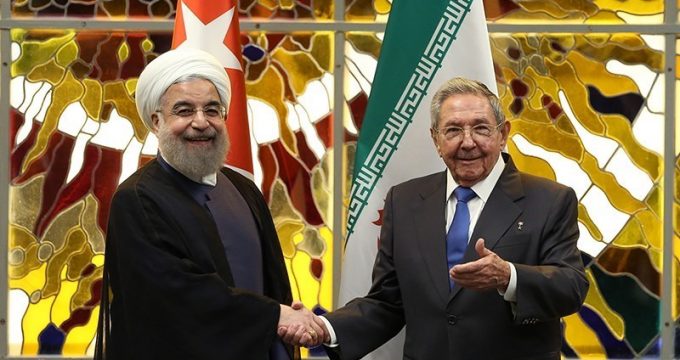 TEHRAN (FNA)- Cuban President Raul Castro is due to visit Iran to initiate a wide stride in the expansion of bilateral relations with Tehran, Havana’s envoy said on Tuesday, adding that Tehran’s Mayor Mohammad Baqer Qalibaf, a potential nominee in Iran’s next year presidential race, is also due to travel to Cuba in October.

Speaking to reporters in Tehran today, Cuban Ambassador to Tehran Vladimir Andres Gonzalez Quesada referred to Iranian President Hassan Rouhani’s invitation to his Cuban counterpart for a visit to Tehran, and said, “The trip will likely be taken next year (2017).”

He also added that Qalibaf will also travel to Havana next month to meet his counterpart.

Noting that Iran and Cuba have further developed their bilateral ties in the past three months, Quesada said, “Trade relations between the two countries have remained leveled off in the past few years due to the sanctions against both nations, but we have tried to maintain our trade ties despite the US pressures during these years.”

In a meeting with his Cuban counterpart Bruno Rodriguez Parrilla in Havana, Zarif underlined that Iran and Cuba have good track record in fighting the US imperialism.

“Iran and Cuba could prove to the US that it cannot proceed with its policies through exerting pressure on other countries,” Zarif said.

He reiterated that the Iranian people also proved to the big powers that the sanctions cannot distance them from their policies and outlooks.

“Now the time is ripe for realizing our common goals together and implement the resistance economy in Iran and materialize (Cuban leader Fidel) Castro’s goals of reconstruction of Cuban economy,” Zarif added.