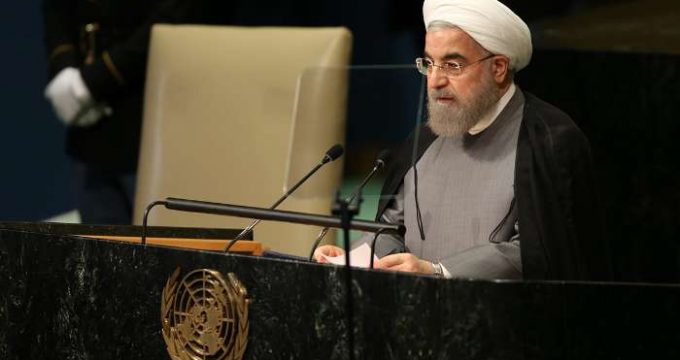 Rouhani’s UN speech seen as warning to the US

“The US is fully aware that JCPOA constitutes a recognized multilateral agreement, and any failure on the part of the United States in implementing it would constitute an international wrongful act and would be objected to by the international community. Any failure in implementing the JCPOA will further erode the credibility of the United States in the world.

The lack of compliance with the JCPOA on the part of the United States in the past several months represents a flawed approach that should be rectified forthwith. Unfortunately, such illegal actions are not unprecedented: the latest case in point is the US Supreme Court ruling to seize billions of dollars of the Iranian people’s assets. This experience demonstrated that the Zionist pressure groups could go as far as having US Congress pass indefensible legislations forcing the highest American judicial institution to violate preemptory norms of international law.”

This is perhaps the most remarkable part of President Hassan Rouhani’s speech addressed to the General Assembly of the United Nations on September 22, 2016. His criticism of the United States for its “lack of compliance” on the nuclear deal prompted a response by the newly appointed Persian spokesperson for the US Department of State Sahar Nowrouzzadeh who dismissed the claim in an interview with Voice of America Persian service, saying the US does not prevent ‘authorized trade’ with Iran.

Iranian media are also reporting that pro-Israel lobbies including Anti-Defamation League and World Jewish Congress have condemned the speech for its anti-Semitic tone.

Domestic responses varied, too. Back in Tehran, president Rouhani told reporters that the US has vowed to ‘rectify its non-compliance’.

One of the most vocal critics of Rouhani’s foreign policy, Kayhan’s Hossein Shariatmadari found it a feeble excuse and urged Rouhani to take decisive countermeasures. Calling some of Iran’s commitments under the JCPOA irreversible, Shariatmadari noted that Rouhani has failed to answer how he expects the US to keep its oral promise while it has failed to do so regarding an international treaty.

Reformist MP Fatemeh Zolghadr also told IRNA that the speech was made based on dignity, wisdom, and expediency, the three tenets of Iran’s foreign policy according to Supreme Leader Ayatollah Khamenei, and represented a great nation in delivering the sacred message of Islamic Republic to the world. More than tens of meetings with leaders indicate how well the establishment’s positions and the president’s wise remarks were received by the international community, she added.

An article written by Hadi Mohammadi, published in Khorasan daily, found Rouhani’s speech based on the existing world order, as opposed to his predecessor’s, Mahmoud Ahmadinejad, which demanded world leadership and lashed out on the new world order. Titled “The Post-deal Peace in Rouhani’s Last Speech”, the article praised how moderate Rouhani challenged the Saudis over their involvement in Syria, Iraq, and Yemen, questioned the US over its non-compliance, and condemned the “Zionist regime” for its occupation of Palestine. “At the end of his speech however, Rouhani … spoke of economic progress, security, and stability in Iran, of how credible international institutes had come up with good predictions for the country’s economic growth, and how investment in Iran could be among most profitable economic measures,” the article added.

Iran still looks forward to seeing economic openings after the lifting of sanctions promised in the nuclear deal. The international community has repeatedly confirmed that Iran’s commitments have been fully realized. However, potential economic partners and top international banks are still reluctant to work with Iran, fearing punishment from the United States.

By Iranian Diplomacy
JCPOA, Rouhani in UNGA, US September 26, 2016
IRGC Commander: Thousands of valuable documents seized from captured US marines in January
A Canadian Minister born in Iran’s Mashhad