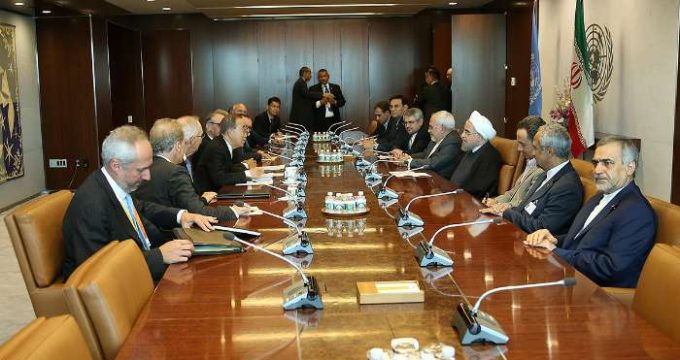 TEHRAN (Tasnim) – Iran’s president expressed “deep concern” over the humanitarian situation in Yemen, calling on the UN to fulfill its “historic” duties as a Saudi-led coalition continues bombing civilians in the Arabian Peninsula country.

Speaking at a Wednesday meeting with UN Secretary-General Ban Ki-moon in New York, President Hassan Rouhani deplored the Saudi crimes in Yemen, saying that the continued military attacks and war crimes in Yemen are “extremely worrying” as all international conventions are being violated in the Arab country.

“This war against the Yemeni people has no (rational) basis and has been waged in violation of all regulations and continues with bombarding women and children,” Rouhani said.

He added that impartial international organizations have acknowledged that “a certain country” (Saudi Arabia) has committed war crimes there.

The United Nations is expected to fulfil its duty to address the Yemeni crisis despite some pressures, Rouhani underlined, adding, “The UN and the secretary-general should play their important role at this historic moment.”

At the beginning of the meeting, Ban praised Iran’s presidency of the Non-Aligned Movement over the past four years, saying that he admires Iran’s outstanding work during the period.

He further asked the Islamic Republic to help resolve the Syrian and Yemeni crises.

Yemen’s defenseless people have been under massive attacks by a coalition led by the Saudi regime for nearly 18 months but Riyadh has reached none of its objectives in Yemen so far.

Since March 2015, Saudi Arabia and some of its Arab allies have been launching deadly airstrikes against the Houthi Ansarullah movement in an attempt to restore power to the fugitive former President Abd Rabbuh Mansour Hadi, a close ally of Riyadh.

Nearly 10,000 Yemenis, including 4,000 women and children, have lost their lives in the deadly military campaign.