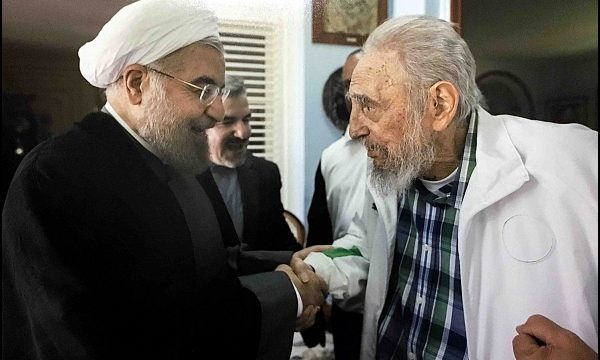 Havana, Sept 20, IRNA – Visiting Iranian President Hassan Rouhani said that the great Iranian nation has succeeded to continue its economic growth despite pressures and sanctions imposed against the country.

President Rouhani made the remarks in a meeting with former Cuban president and revolutionary leader Fidel Castro in capital of Cuba where the former arrived on Monday afternoon local time (early Tuesday morning in Tehran) for a two-day visit.

Describing Cuba as a symbol of resistance and struggle against colonialism in the Americas, President Rouhani said he is happy that his first bilateral visit to Latin America has been started from Cuba.

Noting that the Iranian and Cuban nations were under heavy pressures by foreign powers, President Rouhani said that revolution of the Cuban nation faced the most severe US-led economic sanctions and the Iranian people resisted during eight years of Iraqi imposed war while both Eastern and Western powers were supporting the aggressor (Ba’ath regime of the executed dictator of Iraq Saddam Hussein) therefore, ‘Iran and Cuba are symbols of resistance against toughest sanctions.’

Meanwhile Castro recalled his memories from the early days of the Islamic Revolution in Iran (1979) saying that he had said the late Founder of the Islamic Republic Imam Khomeini about his positive views on both the Iranian nation and their revolution.

Pointing to President Rouhani’s speech in the newly-ended 17th Summit of the Non-Aligned Movement in Venezuela, Castro said that he listened carefully to the impressive speech of President Rouhani stressing that the speech and also presence of the Iranian president in the region has created a positive spirit among Latin American states.