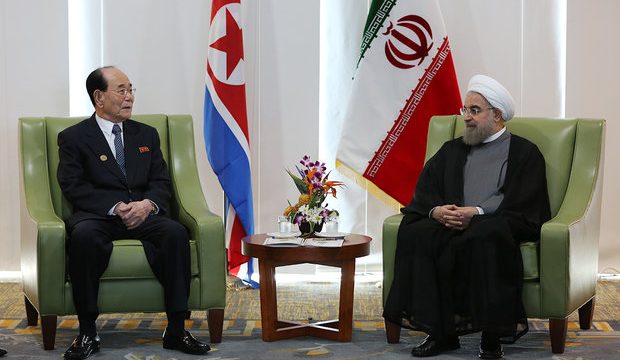 MARGARITA ISLAND, Sep. 19 (MNA) – In a meeting with North Korean ceremonial head of state, President Rouhani stressed that escalation of tension in the region must be avoided so that major powers could not have the pretext to interfere.

Iranian President Hassan Rouhani held talks with North Korean Chairman of the Presidium of the Supreme People’s Assembly, Kim Yong-nam, on Sunday, on the sidelines of the Non-Aligned Movement Summit held on Venezuela’s Margarita Island.

During the meeting, the Iranian President underscored the significance of peace and stability in East Asia, calling on all regional countries to exercise wisdom and prudence for the perseverance of security, particularly in the East Asia region.

“Potential problems and disputes in regions must be settled through political approaches and by regional countries themselves,” Rouhani said. “It is not acceptable to allow the meddling of certain major powers in regional affairs to be turned into conflicts among regional nations.”

Kim Yong-nam, for his part, described the relations between the two countries as long-standing, adding that Pyongyang is keen on expanding relations with Tehran.

The North Korean official then presented Rouhani with a report on the latest developments in East Asia region.

The two sides further called for the continuation of Tehran-Pyongyang cooperation in line with benefiting both countries.