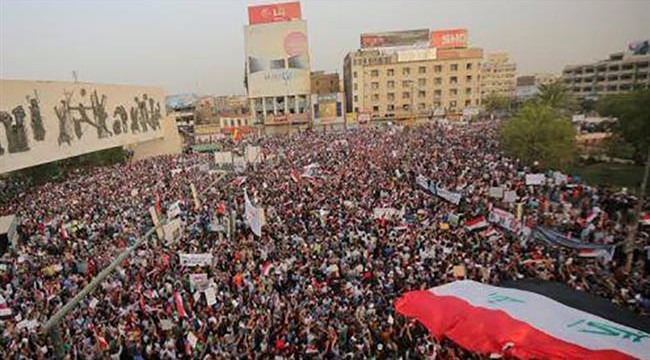 Thousands rally for reforms, against corruption in Iraq

Thousands of the supporters of prominent Iraqi cleric Moqtada al-Sadr have staged demonstrations across the country to demand what they call the containment of rampant corruption and the formation of a technocrat government.

On Friday, protesters gathered at Tahrir (Liberation) Square in the Iraqi capital, Baghdad, to call for comprehensive change in governmental organizations, a genuine fight against alleged corruption as well as improvements in youth employment and national job opportunities al-Baghdadia television network reported.

“The government ignores public demands for reforms. It is impossible to bring about reforms when government ministers are corrupt. The government had better resign and be replaced with a technocrat one,” said a protester, Sa’d al-Kanani.

Elsewhere, in the city of al-Diwaniyah, located 130 kilometers (80 miles) south of Baghdad, people staged a mass demonstration to demand the implementation of reforms and the trial of corrupt officials.

The demonstrators carried banners calling for reforms, better public services as well as changes to the electoral law to ensure that corrupt authorities would not assume power again. They vowed to escalate their protests in case their demands go unanswered.

Also on Friday, hundreds of people took to the streets in the southern Iraqi city of Basra, demanding the formation of a technocratic government and the eradication of corruption from state institutions.

They also called on the Baghdad government to dismiss Basra’s Provincial Governor Majid Mahdi Abd al-Abbass al-Nasrawi, and asserted that they will continue holding demonstrations until their demands are met.

Over the past few months, hundreds of Iraqis have been staging rallies in Baghdad and elsewhere in the country every Friday, urging the government to implement reforms.

The establishment of such a corruption-free government has been stalled by persisting differences among various Iraqi political factions.

Baghdad witnessed uproarious protests in July, when demonstrators, mostly the supporters of Sadr, rallied against what was described as rampant corruption within the country’s ruling structure. A large number of people were killed or injured during the rallies.

Earlier in May, Sadr’s followers broke into the parliament compound inside the capital’s fortified Green Zone, protesting a stalled vote to endorse Abadi’s ministerial nominees in the chamber.

Later, however, they stormed Abadi’s own office building, also in the Green Zone, apparently in protest at government corruption.

On May 20, Abadi called on the nation to set aside political differences and unite against the Takfiri Daesh terrorist group, which has been ravaging the country since June 2014.