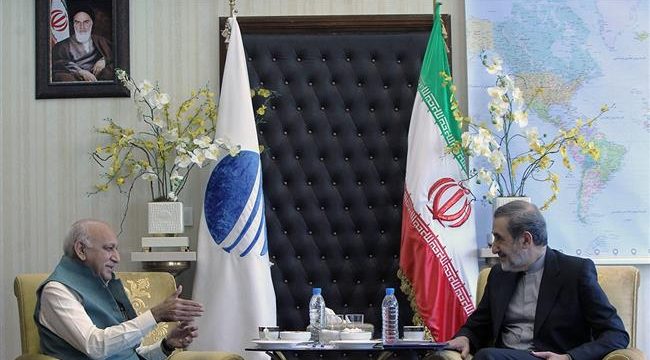 Ali Akbar Velayati and Mr. Mobasher Jawed Akbar addressed a host of issues including fighting terrorism in the Middle East and bilateral ties; Mr. Velayati believed that Iran and India could use their capacities to develop bilateral ties to address regional crises; “with cultural affinities between Iran and India, bilateral ties would be developed more than the current levels and would help international and regional peace,” he told the meeting. “On fight against extremism, both sides would share their planning and experiences.”

Velayati who also chairs Strategic Research Center of the Expediency Council, addressed economic and cultural relations as well as transit and transportation, and other fields as possible Tehran-Delhi grounds of cooperation in a long-term projects; “Iran, India, and Afghanistan should especially develop trilateral ties, an effort which embodied in trilateral economic agreement to develop Makran coasts,” he told Indian official.

Jawed Akbar for his part also shared Mr. Velayati’s view of cultural affinities between Iran and India, while expressing satisfaction to his Tehran visit which sought to deepen cordial ties further; “with long history of friendly relations as brilliant precedent for us, we welcome further development; we believe that terrorism and extremism poses grave threat to the world and should be addressed through collective will,” he closed his brief address.