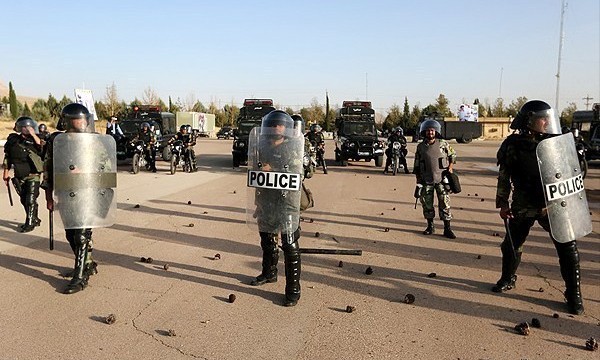 TEHRAN (FNA)- The Islamic Revolution Guards Corps (IRGC) dismantled a team of 9 terrorists “sent by Saudi Arabia to foment insecurity inside the country”.

The IRGC killed four of the terrorists, including their commander, and injured two others in the city of Saravan in Sistan and Balouchestan province in Southeastern Iran.

Official statements said the terrorist team which intended to carryout “sabotage acts inside Iran was disbanded by the IRGC in the Kouhak border region of Saravan city”.

In a relevant development on Wednesday, the Iranian intelligence and security forces dismantled a team of 12 terrorists sent by Saudi Arabia and certain trans-regional states to foment insecurity inside the country.

The terrorist team which was equipped with light and semi-heavy weapons and intended to carryout sabotage acts inside Iran was disbanded in the Western bordering areas of Sardasht city on Wednesday night through cooperation with the IRGC forces.

Also on Wednesday ten terrorists of the outlawed Democrat Party were killed in armed clashes with the Iranian border guards in the Western province of Kurdistan.

The terrorists who were trying to sneak into the country through the Western Iranian borders in the village of Baneh and Khalfi in Sardasht region, sought to foment insecurity in Iran’s Kurdistan province.

Based on the latest information, 10 terrorists of the outlawed group were killed during the clashes which started on Tuesday night and lasted for several hours.

Early July, the IRGC forces had also disbanded an anti-revolutionary cell in Western Iran which plotted to sneak into the country for sabotage acts, killing all its 11 members.

Noting that the IRGC forces blocked the group’s move towards their destination and pushed them towards Kouhsalan district of Sarvabad region after 10 days of tracing, he said, “It was there that our forces killed all the 11 members of the team.”

Three local IRGC forces were also killed in clashes with the outlawed group.

IRGC Ground Force Commander Brigadier General Mohammad Pakpour announced at the time that Kaveh Javanmard, a commander of the anti-revolutionary group, was killed in the Western parts of Iran.