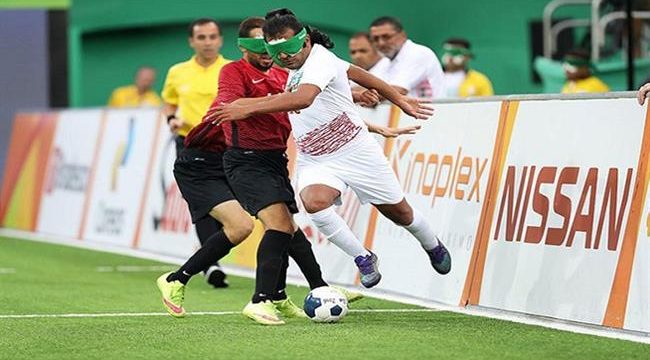 Iran’s national 5-a-side football team has been held to a goalless draw against Turkey in its opening encounter at the preliminary round of the 2016 Summer Paralympics in Rio de Janeiro, Brazil.

On Friday afternoon, the visually-challenged Iranian sportsmen started the Pool A match at the Olympic Tennis Center in a better fashion, and threatened the opposite side’s goalpost on a number of occasions. They, however, failed to score a goal and both teams went into the cloakrooms tied at nil.

The Persians had a vast array of scoring chances after the break, though they squandered the opportunities.

Iran will play against Morocco in its second match at the group stage of the 2016 Rio Paralympic Games on Sunday.

The Islamic Republic of Iran has been drawn in Pool A alongside Brazil, Morocco and Turkey. Argentina, China, Mexico and Spain form Pool B.

Five-a-side football includes a smaller pitch, smaller goals, and a reduced game duration. The penalty area is semi-circular in shape. There are no offside rules and headers are not allowed.  Players are also required to wear shin guards but this is usually at the discretion of the referee.

The five-a-side football competitions at the 2016 Rio Paralympic Games started on September 8, and will finish on September 16.

The Islamic Republic of Iran National Paralympic Committee has dispatched a 111-strong delegation, dubbed the Mina Caravan, to the 12-day sporting event. Iranian sportsmen and women are in action in 12 different fields.

Iranian athletes have so far collected two medals — one gold and one silver — and the Islamic Republic is in the 20th slot of the medal count table.