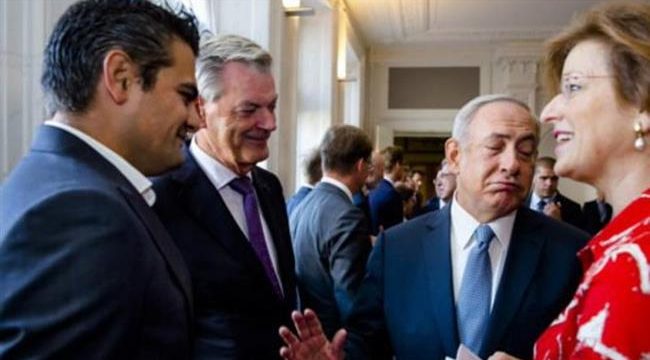 A video has emerged showing Dutch Muslim lawmaker Tunahan Kuzu refusing to shake the outstretched hand of Israeli Prime Minister Benjamin Netanyahu during the latter’s visit to the European country.

In the footage, Kuzu, wearing a Palestinian flag lapel pin, is seen keeping his hands behind his back as Netanyahu approaches to shake his hand.

Netanyahu is then seen shrugging in response and moving away.

The protest action by Kuzu, who is a vocal supporter of Palestinian rights, garnered support on social media.

Kuzu explained later that he intended the gesture as a sign that many in the Netherlands object to the abuse of Palestinian civilians living under the Israeli military rule in the occupied territories.

“While the streets of Gaza were reddened by blood that splashed out of the veins of children in the summer of 2014, the red carpet is rolled here,” Kuzu wrote on Facebook.

“That deserves no handshake, but a reference to #FreePalestine,” he said, referring to one of the most popular hashtags used by activists to highlight the plight of the Palestinians.

Ahead of the visit, former Dutch prime minister Dries van Agt described Netanyahu as a “war criminal” and said he should be sent to the International Criminal Court (ICC) “right away.”

Netanyahu’s visit triggered protests in the Netherlands. On Tuesday, thousands of people staged a demonstration in The Hague, demanding that Netanyahu be brought to justice for his crimes.