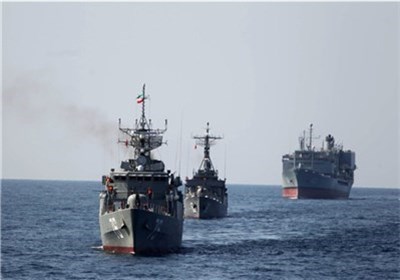 TEHRAN, Sep. 07 (MNA) – The 43rd flotilla of Iran Navy, while carrying message of peace and friendship, has been dispatched to Port of Karachi in Pakistan.

Accordingly, the Iranian fleet, which consists of two logistic ships, two destroyers and a chopper, will attend a ceremony in the Pakistani port before leaving for Bab-el Mandeb Strait and Gulf of Aden.

Deputy commander Bigham said the 43rd fleet of Iran’s Navy started its mission with message of peace and friendship adding “Iran and Pakistan enjoy excellent diplomatic relations and the presence of the Iranian fleet in Karachi aims to further strengthen political and military ties between the two sides.”

Also, the Iranian Navy’s 42nd fleet of warships, which had been dispatched to the high seas on mission, was welcomed after returning home on Wednesday morning in Bandar Abbas port in Iran’s territorial waters in the Persian Gulf.

The 42nd fleet had the mission to provide security to the Islamic Republic of Iran Shipping Lines in the Gulf of Aden in order to maintain the country’s authority as well as to confronting the enemy’s Iranophobia project.

Iran’s Navy, as a strategic force, has so far been successful in bolstering security of the country’s border lines on high seas and international waters.