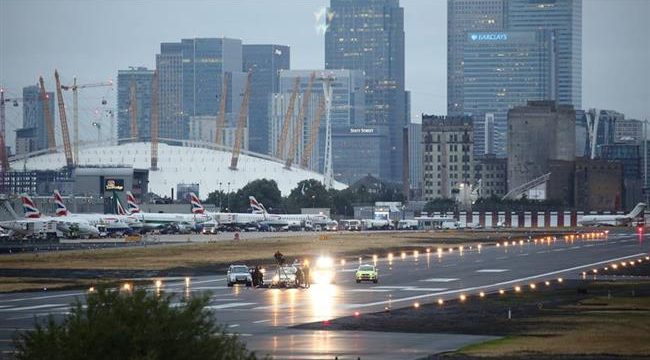 British authorities have been forced to cancel all flights at the London City Airport after a number of Black Lives Matter activists managed to occupy its runway.

The incident happened on Tuesday morning, when a number of BLM protesters gained access to the runway by crossing a nearby river.

“The runway is currently closed due to protesters on site. Police are present and we will resume normal operations as soon as possible. We apologize to passengers for any inconvenience to their journey,” an airport spokesperson said.

Police units reported to the scene on 5:40AM and remained there, trying to break the rally.

“We believe that the protesters are airside. We are on scene at the moment and the incident is ongoing,” a spokesman for the Metropolitan Police said.

The protest cancelled all flights to Zurich, Geneva, and Guernsey. All incoming traffic were also diverted to other airports.

According to the Evening Standard, the demonstrators reportedly used a boat to cross the Royal Docks in order to reach the tarmac.

“They got onto the runway using a rubber dinghy from the dock,” said one witness, who did not want to be identified.

The Black Lives Matter movement was formed in the United States, after the acquittal of the white officer who shot dead unarmed black teenager Trayvon Martin in 2012.

In early August, nationwide BLM protests were held in the UK, to mark the fifth anniversary of the death of Mark Duggan, who was shot by police.

The 29-year-old Duggan was shot dead by British police in August 2011 in his home town of Tottenham when 11 armed officers stopped a minicab he was in on suspicion of possessing an illegal firearm. Evidence suggests there was no weapon found on Duggan, but a handgun hidden in a sock was discovered four meters away from his body.