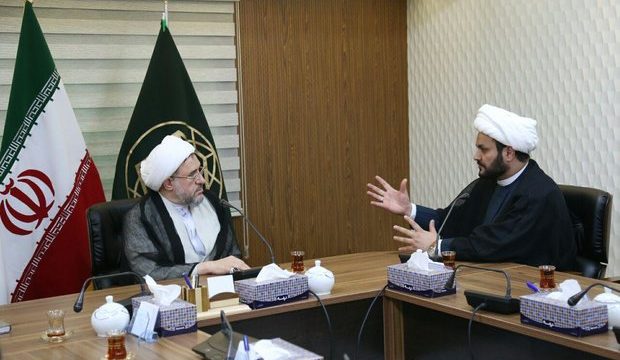 ‘We are followers of Imam Khamenei’

Sheikh Akram al-Kaabi held a meeting with Sheikh Mohsen Araki, Secretary-General of The World Forum for Proximity of Islamic Schools of Thought, on Tuesday, August 30, and pointed out at ISIL’s intellectual base saying the terrorist group has intellectual and public bases in some areas of Iraq. “We will not be able to compeletly defeat ISIL if we do not eliminate these bases.”

Al-Kaabi pointed out at al-Hashd’s formation as a way to fight ISIL and clarified that al-Hashd represents all the Resistance groups in Iraq. “These groups are powerful because of their jihadi ideology and their trainings; Al-Hashd’s power relies on these Resistance groups,” he said.

Pointing to the al-Nijaba’s jihadi ideology he said “we follow Vilayat-e Faqih with the leadership of Imam Khamenei and will be present wherever Resistance is needed.”

Clarifying on ISIL’s fate, he said after losing war in Iraq this group will pose threats to the security and will target civilians in Iraq; “we have to take serious measures to tackle it.”

Stressing on the intellectual fight with ISIL he said after a number of military operations, Americans announced that Al-Qaeda has been eliminated. However in order to uproot terrorism, the intellectual roots have to be removed; to acheive this we must focus on Islamic unity and proximity of Schools of Thought.

He added that there are politicians in Iraq who seek success through sectarianism and are connected to the US, Qatar, and Saudi Arabia. “These politicians tried to ask radical Sunni clergymen to go to recently liberated areas, especially to Fallujah, but we strongly disagreed with it” said he.

Arguing that the solution to sectarianism in Iraq is to attract moderate Sunni figures he added, “in order to acheive this we formed the deputy of proximity of religions and schools of thought in al-Nujaba and took moderate Sunni scholars to the newly liberated areas to teach and purify people.”

He stressed, “we even formed battelions in al-Nujaba consisting of Sunni people from Fallujah and Tikrit. They helped us a great deal in the liberation operations of these areas.”

He clarified that “it is our policy to have more connection with Sunni people. We opened Sunni people’s mosques in Shia areas and will protect them.”