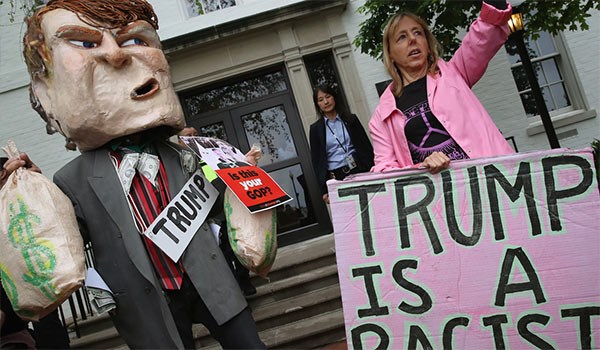 A number of US activists have gathered outside one of Donald Trump’s projects in Washington, DC to express their opposition to the Republican presidential nominee.

The gathering, which was held at Trump International Hotel’s building site on Sunday, condemned Trump’s racist and insensitive rhetoric.

The New York businessman’s campaign has been marred by his disparaging remarks against minorities in the US. His comments include a call to ban all Muslims from coming to America as well as forced deportation of Mexican migrants by building a long wall along the US-Mexico border.

On Saturday, the bombastic candidate reiterated his plans to deport “illegal immigrants” as soon as he is sworn in as president.

Trump also doubled down on the most controversial aspect of his immigration policy – building a towering wall along the US-Mexico border.

“I am going to build a great border wall, institute nationwide e-verify, stop illegal immigrants from accessing welfare and entitlements and develop an exit-entry tracking system to ensure those who overstay their visas are quickly removed,” Trump said.

Earlier this month, the real estate mogul defended his Muslim ban proposal during his acceptance speech at the Republican National Convention (RNC) in Cleveland last month.

When faced with backlash from the family of a Muslim US soldier who was killed in Iraq, Trump set off another firestorm by making fun of them in response.

The Republican nominee’s recent missteps have put him behind Hillary Clinton, his Democratic rival the race for the White House.

According to the latest Reuters/Ipsos daily tracking poll released on Friday, the former secretary of state leads the New York billionaire by 5 points, 41 percent support to 36 percent.