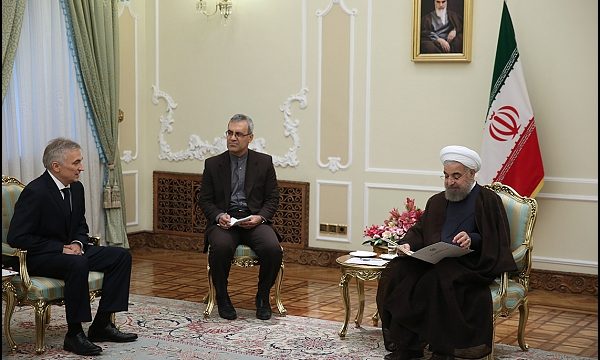 Tehran, Aug 28, IRNA – President Hassan Rouhani on Sunday acknowledged the efforts of Iranian, Belarusian officials to develop economic cooperation, saying that the bottlenecks must be removed in this respect.

President Rouhani made the remarks in a meeting with new Belarus Ambassador to Tehran Yuri Lazarcic.

Considering decision made by presidents of Iran and Belarus on the sidelines of Ufa Conference to draw up a roadmap to develop trade and economic cooperation, Rouhani said that now, the roadmap has been drawn up and signed by officials, so the two sides should try to translate the agreements into practice.

President Rouhani said that his meeting with the Belarus president and negotiations made by the other senior officials of Iran and Belarus to develop ties and cooperation have been effective.

He expressed hope that ties between Tehran and Minsk would enjoy major growth.

The new Belarus Ambassador to Tehran Yuri Lazarcic submitted his credentials to President Rouhani, saying that bilateral relations between the two countries are friendly and based upon reciprocal respect and confidence.

Following Iran’s great success to strike nuclear deal with permanent members of the UN Security Council, good opportunity has been created for development of cooperation.