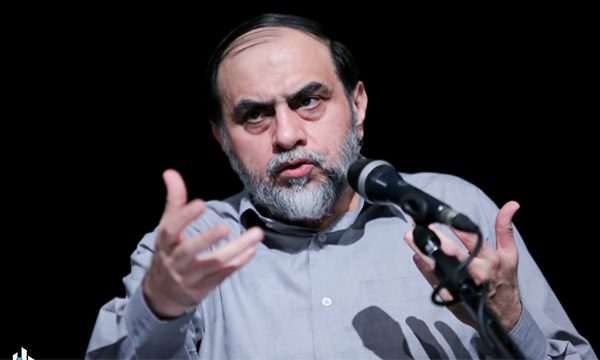 Rahimpour Azghadi: “Once again Mecca must be conquered by Muslims all over the world….. Saudi family is the main reason of converting Ibrahimi Hajj to American Hajj.”

On 22nd of August Hassan Rahimpour Azghadi, who is a member of Iranian Supreme Council of Cultural Revolution (SCRC), took part in Conference of Reviewing American Islam in Tehran, where families of martyrs of Mina incident in 2015 were also present. He stated: “the main subject of this conference is Saudi family which is the biggest barrier to Muslims in retrieving their honor, glory and unity.”

This member of SCRC asserted that Saudi family is the “mother of fitna” in the heart of world of Islam and said: “this conference might be only about people who were banned from taking part in this year’s Hajj and Shia and Sunni martyrs of last year’s incident caused by Saudi Family. “

He said: “today, Ansarollah in Yemen has become a great honor and a voice of freedom for oppressed people. It also acts as a barrier which is resisting conspiracies of Americans, Zionists, Wahhabis and takfirists.”

Azghadi mentioned different aspects of Mina incident and said: “even if number of victims of this incident is as Saudi regime claimed about 4000 people and even if the incident isn’t an official conspiracy planned by the regime and nothing suspicious caused it, this is still the deadliest and biggest Hajj disaster and is a sign of management corruption and incompetency of Hajj organizers.”

He continued: “since prophet Ibrahim, never had thousands of people died in this manner and in such a short time during Hajj. Muslims have some great gatherings in the world, such as pilgrimage on Arbaeen day in which about 15-20 million Muslims walk 100 kilometers to get to Karbala or in Mashhad when 3-4 million people pilgrimage to visit Imam Reza’s shrine and we’ve never seen things same as what happened during last year’s Hajj, which is considered the most important gathering of Muslims, and when only about 1.5 million people were present.”

Azghadi noted: “every year during Hajj pilgrimage, there was tens or hundreds of causalities, until last year when 7000 people lost their lives. Countries with greatest number of victims stayed quiet, they were bought off. But when we protested with 500 victims, our protest was boycotted in the world.”

He affirmed: “Islamic world and Muslims were ridiculed in terms of management by what happened last year during Hajj.  No matter how much we try to neglect mass terrorism guided by governments or bioterrorism, documentary reports which are revealed frequently, don’t let us do so.”

Azghadi stated: “G4S company is a British-Zionist company and Israel has entrusted the security of its prisons and roads to this company. It is also responsible for security of Muslims’ Hajj. These companies are formed to set up coups and religious and tribal wars among Muslims. Some of these companies are known and are openly busy with suppression of people in Yemen and Iraq, and some of them are unknown and we will never come to know their names. Because Zionist regime has never allowed any unbiased investigation in their activities and will never do so. This is the manner of Zionists, Americans and their allies.”

This member of Iranian SCRC stated: “the 27th verse of al-Fath Surah says: “Verily, Allah shall fulfill the true vision which He showed unto His Messenger in very truth. Truly, you shall enter al-Masjid al-Haram if Allah wills, in security …” it talks about the security on arrival of Prophet Muhammad (p.b.u.h) to Mecca. Once again Mecca must be conquered by Muslims all around the world. Mecca is currently occupied by Sufyani pagans, it’s occupied by likes of Abu-Jahl and Abu-Sufyan. Mecca is occupied by Lat, Hubal and Uzza (three idols which were worshiped in Mecca before emergence of prophet Muhammad). Once more Mecca must be cleansed form idolatry. Hijaz and the two Holy Mosques must be set free by Muslims.”

He mentioned US and Zionist regime’s missions to Saudis and said: “from a century ago up to foundation of Saudi regime by the British and during last 80 years, Saudis hve managed to complete their missions successfully. Some of the missions are: controlling and management of western capitalism’s interests, creating and fomenting discord among Muslims, Islam’s deviation, heresy and changing Islamic values and concepts (by substitution of Wahhabi Islam with Sunni Islam), defending presence of the Zionist regime and Israel and maintaining corrupted and dependent regimes in the region.”

Hassan Rahimpour Azghadi stated: “Saudi family was one of first allies of the Zionist regime and uses any chance to suppress whoever opposes Zionism in Islamic and Arab world and it won’t let the Islamic revolution movement of Palestine lead to the country’s freedom. Most Arab countries in the region are payed off monthly by Saudi family. This is separate from Saudi’s secret aids to them; from countries in North Africa like Egypt to Jordan and Pakistan and more. All their officials receive monthly wages from Riyadh. Saudi family pays hundreds of million dollars to each of the presidents of 30-40 countries.”

He continued: “Turkey is putting all it has to strike the Resistance. Today, the greatest barrier to salvation of regional countries is Saudi family. Their biggest mission is controlling the world of Islam and setting a fake Wahhabi Islam to damage Islam and Muslims’ reputation.”

Azghadi said that Arab Sheikhs and Saudis have deviated the concept of jihad. He explained: “Arab Sheikhs and Saudi family have not once condemned or sentenced the Zionist regime or western occupiers in Iraq and Saudi Arabia, but they constantly sentence Muslims. They have transformed “jihad” to a bloody sword that is stabbing hearts and minds of Muslims.”

He added: “Saudis want Islamic nations to give up on revolution and uprising and this is why Saudi Arabia was formed.”

He expressed: “the British had a significant role in creating, propagating and empowering Wahhabism. Turkey offered the biggest logistic support to them working alongside ISIS and takfiri terrorists in Iraq and Syria. After this, Zionist media and some people inside Iran said that a liberal-democratic Islam in Turkey was going to confront the Revolutionary-political Islam of Imam Khomeini (r.a.)”

Hassan Rahimpour Azghadi stated: “today, Arabs must choose one of these two. Some of them said they chose democratic Islam to prevent provoking US and west and announced Turkey’s government as their model. This model had a quick emergence but didn’t gain popularity and its leaders clearly announced its failure and that Erdogan’s era is over.”