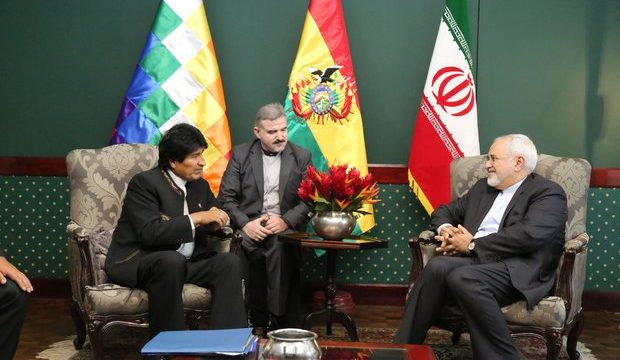 “We are ready to participate with the Iranian side in various agricultural, scientific and technological, financial and banking projects,” he said.

He further expressed his content over the presence of the 120-person Iranian delegation in his country, while over 80 representatives were owners of various private and public economic companies active in the fields of technical and engineering services, pharmacy, technology, biotechnology, industry, mine, oil and gas, agriculture, banking and shipping.

The Iranian delegation has accompanied Foreign Minister Zarif to six countries in Central and South America on official visits aimed at evaluating common economic opportunities for further expansion of relations in the post-sanction era.

“We succeeded in standing firm by each other’s sides and develop our relations despite the wishes of western countries,” said President Morales, while stressing the need for the continuation of this trend of cooperation.

Iranian foreign minister, for his part, highlighted the significance of expanding ties with Bolivia, adding “the Islamic Republic of Iran is keen on deepening bilateral economic cooperation, besides enjoying a good level of political relations with Bolivia.”

Zarif referred to the signing of an MoU on peaceful space cooperation between the two countries, adding “Iran and Bolivia enjoy common positions on many political and international issues. For this reason, we would like to have further consultations with Bolivia about issues of mutual interest as well as regional affairs.”

Zarif and Morales also engaged in the traditional diplomatic gift exchange as they marked Iranian foreign minister’s first visit to Bolivia. Zarif presented President Morales with a silk carpet tableau and an inlaid piece. The Bolivian President gifted Zarif with a collection of Native American statues and an illustrated book of the life of Bolivian people.

Zarif will visit Venezuela today as the last leg of his Latin American tour which kicked off on August 21 to Cuba, and then took him to Nicaragua, Ecuador, Chile and Bolivia.