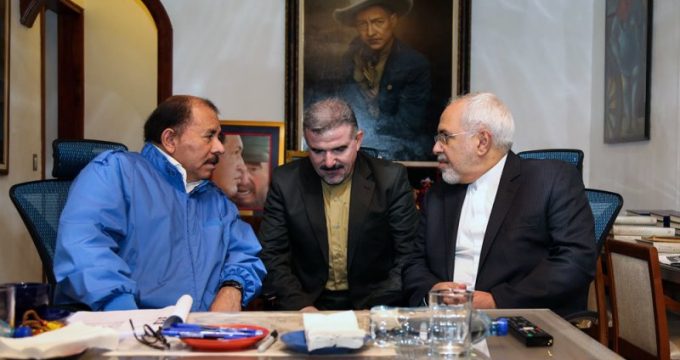 During his one-day visit to the Latin American country, the Iranian foreign minister met and conferred on a number of issues.

The details of the meeting were not disclosed but experts believe the two officials discussed ways of expanding economic relations, the upcoming Non-Aligned Movement meeting in Venezuela, Middle East and regional developments as well as international issues.

Prior to his meeting with President Ortega, Zarif held talks with a number of Nicaraguan officials including his counterpart Samuel Santos.

During his meeting with Santos, he reviewed bilateral and international developments.

The topics of Zarif-Santos negotiations focused on expansion of bilateral ties, especially in the economic field, regional developments and international issues.

The meeting between Zarif and Santos took place at the venue of Nicaragua Foreign Ministry Palace.

Zarif, heading a 120-member delegation has embarked on a tour to Latin America with the aim of broadening of economic cooperation between Iran and Latin America.

The Iranian foreign minister was in Cuba on Monday and travelled to Nicaragua on Tuesday.

Zarif will also visit Ecuador, Chile, Bolivia and Venezuela after wrapping up his visit to Nicaragua.