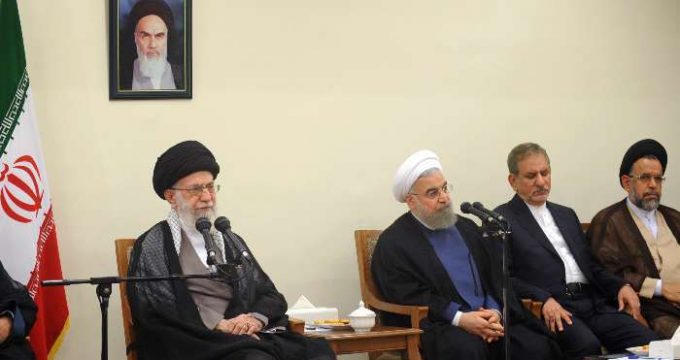 Leader of the Islamic Revolution Ayatollah Seyyed Ali Khamenei has met with President Hassan Rouhani and the members of his administration on the occasion of the Government Week, saying that economic problems are country’s foremost priority.

During the meeting on Wednesday, the Leader lauded Iranian administration’s efforts to solve problems facing people, saying, “Today, economic problems and bottlenecks are the foremost problem of the country, which must be resolved and their resolution depends on correct and accurate implementation of the policies of the Economy of Resistance.”

Ayatollah Khamenei noted that the headquarters set up to supervise implementation of these policies should monitor all state-run and private sectors to make sure their activities are in line with the policies of the Economy of Resistance.

The Leader emphasized that all economic plans and projects, which are not in line or are at odds with the policies of the Economy of Resistance must be stopped.

“An important practical requirement for the implementation of the policies of the Economy of Resistance is building a discourse to correctly delineate these policies and their effects by relevant officials,” the Leader said.

Elsewhere in his remarks, the Leader said foreign policy is a priority for the administration, but cautioned that Iran’s diplomatic capacity should be evenly divided between different regions of the world.

“Asia, Africa, and Latin America must be given their due share in the country’s foreign policy,” Ayatollah Khamenei said.

The Leader added that a great deal of care must be exercised with regard to regional issues, which are very complicated and intertwined and they must be addressed with enough accuracy and vigilance.

JCPOA proved the US untrustworthy

The Leader further noted that outward behavior of countries cannot be taken as a basis for interaction in diplomacy, noting that Iran’s nuclear deal with the P5+1 group of countries, known as the Joint Comprehensive Plan of Action (JCPOA) proved that American cannot be trusted.

Ayatollah Khamenei said a lesson should be learned from the United States breaching its promises with regard to the JCPOA, adding, “This experience teaches us that no promise given by any American administration can be trusted and we must not take practical measures in return for their promises.”

National defense in the face of threats

Referring to the subject of the country’s security, Ayatollah Khamenei praised the Iranian security forces for their role in safeguarding the Islamic Republic’s security at a time when “insecurity is rampant in regional countries.”

The Leader added that Iran’s national defense capability must be kept invincible against the threats facing the country.

The Leader went on to say that Iran’s defense capability must develop further as the country’s adversaries fear the Islamic Republic’s advances with regard to its defense and ballistic capabilities.