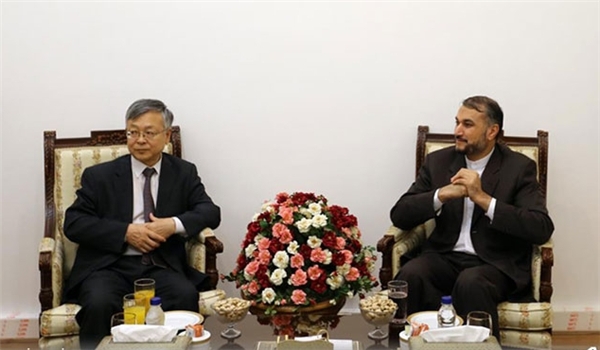 “Revoking citizenship of Ayatollah Sheikh Issa Qassim by the Bahraini government is a fully inhumane move,” Amir Abdollahian said in a meeting with Chinese Ambassador to Iran Pang Sen in Tehran on Monday.

Elsewhere, he referred to the situation in Yemen, and underlined that the Islamic Republic welcomes the formation of parliament in the Muslim country.

The Chinese envoy, for his part, stressed that his country and Iran share views on many regional and international issues, specially on Syria.

“The crisis in Syria only has a political solution and Syria’s sovereignty and territorial integrity should be respected,” he added.

Bahrain’s Interior Ministry announced in a statement in June the country’s top Shiite cleric was stripped of his citizenship.

After the development, Islamic Revolution Guards Corps (IRGC) Quds Force Commander Major General Qassem Soleimani, in a rare statement, warned the Manama regime that in case of any insult or disrespect for Sheikh Qassim, “the toppling of the regime will only be a small part of the repercussions that will also include armed resistance”.

The General blasted the Manama regime for its “unacceptable and inhuman oppression, discrimination, injustice and humiliation” against the Muslim Bahraini nation, and said people on the tiny Persian Gulf island have so far tolerated the Al-Khalifa regime’s apartheid and heavy pressures and continued their uprising peacefully despite the fact that a number of their political and religious leaders have been arrested, their women and children have been imprisoned and tortured, some others have been stripped of their citizenship and undergone intensifying pressures with their rights trampled upon.

He said people’s rise for their demands in a peaceful way has, unfortunately, emboldened the Al-Khalifa regime to intensify its crimes and crackdown on the Bahraini nation, “specially as a result of the meaningful silence shown by the UN, the US and the Western states,” everyday.

“The illegal detention of Sheikh Ali Salman (the head of the main opposition group, Alwefaq) and other political and religious leaders of Bahrain in light of the silence of the international circles has emboldened the Al-Khalifa to threaten the sanctuary of the remarkable cleric and religious leader of Bahrain’s Shiites, Ayatollah Sheikh Issa Qassim, and inspired the people of the region and Bahrain with worrying thoughts,” General Soleimani said in his statement.

“The Al-Khalifa seems to be misusing the peaceful movement of the people and is miscalculating the extent of public fury,” he said, and added, “They certainly know that trespassing the sanctuary of Ayatollah Sheikh Issa Qassim is a redline whose crossing will set fire to Bahrain and the entire region and leave people with no other option, but armed resistance.”

“The Al-Khalifa will pay the price of such an action whose endpoint will be nothing but annihilation of this tyrannical regime,” the Iranian Quds Force Commander warned.

General Soleimani also warned supporters of the Manama regime that any insult to Ayatollah Sheikh Issa Qassim and continued overpressure on the Bahraini people heralds “a bloody Intifada (uprising) with consequences whose responsibility will fall on those who legitimize the arrogance of the Bahraini rulers”.

The latest move by the Bahrain regime against the country’s main opposition figures came as the al-Khalifeh regime is exerting mounting pressure on the opposition.

Bahrain has been in the throes of an uprising since February 2011, when hundreds of thousands of protesters took over a Central roundabout in the capital Manama and demanded political and democratic reform in the authoritarian kingdom.

Bahraini authorities backed by Persian Gulf allies, specially Saudi Arabia, violently broke up the protests, leading to the deaths of hundreds of people, and since then rallies have continued and human rights groups have accused the kingdom of imprisoning and torturing thousands of activists. Hundreds of others have gone missing without any trace or state explanation.