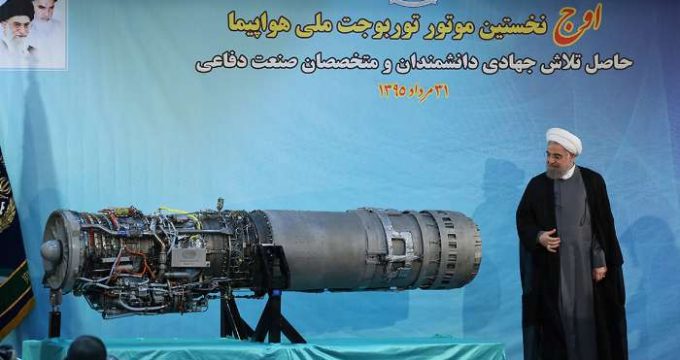 The engine, named Owj (Zenith), was unveiled by Dr Rouhani in the presence of Minister of Defence Hossein Dehqan and a number of officials, scientists and experts of the ministry.

Owj, which is one of the most complicated aviation products, was built without any kind of foreign participation, either in the field of knowledge or software and hardware.

The Defence Minister said that this achievement puts Iran among the eight countries that have the knowledge and technology of these kinds of engines.

The first domestic turbojet engine is capable of operating at an altitude of 50,000 feet and has got various systems.

Regarding the engine, Minister of Defence Hossein Dehqan said that this turbojet engine puts Iran at higher ranks in the region and the world, adding: “Increasing national confidence in Iranian youths’ technical knowledge, attempting to accelerate the process of defensive developments to protect our country’s airspace and national interests, and also increasing inspiration and hope through an Islamic model, are the distinctive features of the major achievements of the turbojet engine”.