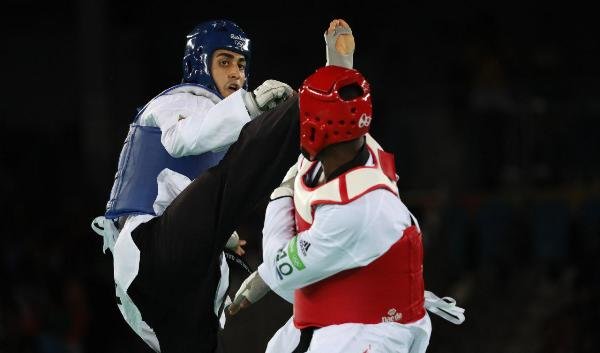 RIO DE JANEIRO, Aug. 20 (MNA) – Iran’s Sajjad Mardani who had a good start in his first match ended up defeated in second round.

Iran’s Sajjad Mardani was victorious over his Tongan rival Pita Taufatofua 16-1 in +80kg category in round of 16 to complete chain of good news on Saturday for Iranian camp. His match in quarterfinals was Saturday night 11:45 Tehran time versus Mahama Cho from the United Kingdom.

Cho was leading 3-1 in first round and Mardani gained another point before ending second round 3-2. In third round, Mardani managed to end the normal time 3-3 to go for a golden point round. In the sudden-death stage Sajjad Mardani appeared more aggressive and controlled the match for almost two minutes before he finally gave up all of a sudden to Cho’s kick which gained the British fighter one point and led him to the semi-finals.

Given that Mohama Cho failed to reach the finals after losing to an Azeri rival, Iran’s Mardani also missed the chance to fight in a bronze medal match.