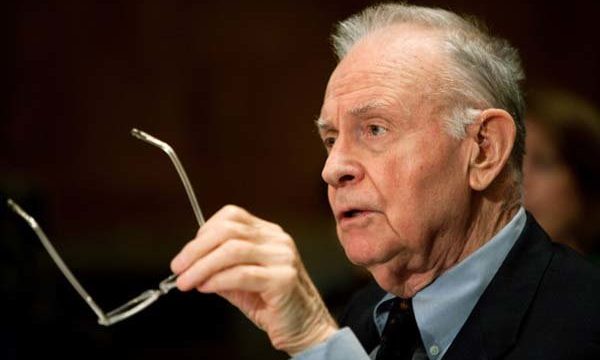 No guarantee next US president to keep JCPOA

TEHRAN, Aug. 20 (MNA) – Former US Congressman admits there is no assurance next president of the US will not negate Iran nuclear deal.

A former democratic Congressman and Homeland Security Advisory Council member Lee Hamilton has told Payman Yazdani of Mehr News Agency’s international desk that while US presidents have ‘usually’ respected deals made by their previous administrations, there is no guarantee next president would adhere to nuclear deal with Iran.

Here is the full text of teh interview:

In the letter to president Obama that you were one of the signatories, you suggested a direct diplomatic channel between Iran and the US on issues such as ISIL, Iraq and Afghanistan. What are the common interests of Iran and the US in these issues?

We were suggesting a diplomatic channel because our two countries have series of problems that we may try them to be resolved and the main way to do it is through a constant sustainable channel of talks. Iran is a major player in the region and we have some commonalities and a number of issues which we have sharp differences of opinion. My feeling was that diplomacy is necessary and if you don’t have diplomacy then I think the differences exacerbate and grow and the relationship deteriorates even further, so I think diplomacy is crucial.

Nowadays, some US presidential candidates, particularly the Republican runner Donald Trump, are talking about possible US retreatment from JCPOA. In fact, such remarks create a poisonous psychological situation discouraging cooperation or investments of banks especially the European ones with or in Iran. In other words, banks are worried about possible revocation from JCPOA by next US administration. Because of this fact investment process in Iran after lifting sanctions are not satisfactory and are very slow. How can President Obama guarantee the continuation of implementation of JCPOA during next administration?

I cannot speak for Mr. Trump nor for that matter for Mrs. Clinton. I know that there is no guarantees here and that’s just the way American political system works. Yes, it is generally true that the agreement that has been reached by a predecessor president is generally adhered. Let me emphasize again that there is no guarantee. If Mr. Trump comes in and he wants to torpedo it, he probably can do it. But it would be departure from usual practice. The usual practice is that an incoming president will accept the agreement that his or her predecessor made, but no guarantees.

I don’t know what next president will do, but I think if he thinks the agreement is a bad one he can do many things in foreign policy according to the US law. The point you made is right and it is a strong argument but I don’t know what he is going to do. We have to keep our words. Some analyst and Turkish officials believe that the July 15 failed military coup in Turkey against elected Turkish government was masterminded and supported by the US. What do you think of this?

Turkey has not supported that with any evidence. The US government denies supporting coup against Turkish government.

But this is not just a claim made by Turkish officials, even some American figures like Mr. Trump has approved and claimed it?

Well, I don’t know this; I only know what our government said. My government said we did not encourage the coup and I accept that. I know a large number of people in Turkey do not accept it but I do. I do not say the US government engaged in an effort to overthrow a NATO ally even though he was doing something.

The US Foreign policy in the Middle East shows its approach toward ‘security’ issue. While the US claims that it stands for democracy and liberal values inside and outside, at the same time it is supporting some undemocratic regimes and monarchies in the region such as Saudi Arabia and Bahrain. It means that US prefers its allies stability and state security rather than human security and human rights. If we accept the US defends liberal values both inside and outside, how can such a double standard be justified?

The US has a number of different interests in formulation and implementation of American foreign policy. Sometimes these interests are strategic, humanitarian, economic and political. These are just American decision makers that decide which one is priority, but they often choose as your question suggests stability and backing dictators and autocrats in the Middle East. What we have done there as a nation is to elevate the concerns for stability in the region above human rights and promotion of democracy, so what the US does it to depend on the factors present in any given situation. We are going to be accused time to time of hypocrisy and incontinency, but foreign policy is a very complicate business. Sometimes you put economic interest first, sometimes you put humanitarian interest and sometimes stability. This has been what we have done in number of instances.

How do you see the future of the Iraq? Will ISIL be defeated or not?

I make no prediction. I am not in prediction business.