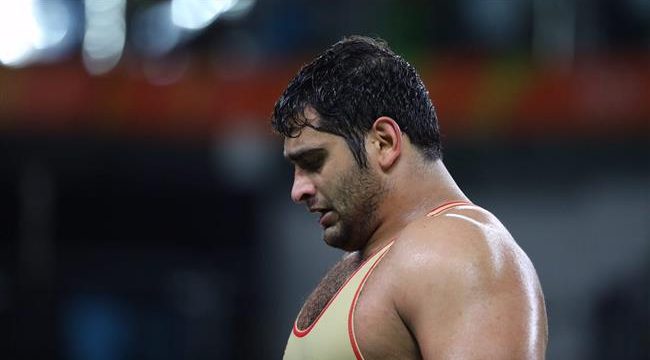 Iranian Greco-Roman wrestler Bashir Babajanzadeh Darzi has finished his campaign at the 2016 Summer Olympics in Rio de Janeiro, Brazil, after his dream for a repechage competition at the world’s most international and prestigious sporting event was shattered.

On Monday, the 26-year-old Iranian heavyweight wrestler received a bye in the first round of the men’s 130-kilogram contests at the indoor Carioca Arena 2 stadium in Rio’s western district of Barra da Tijuca.

Babajanzadeh Darzi overcame 29-year-old Chinese counterpart Meng Qiang 3-1 in his first encounter. However, he conceded a 1-3 defeat against Germany’s Eduard Popp later on.

“I was physically prepared and in proper form, but unfortunately lost the competition. I unjustifiably conceded three points to the German rival, and that accounts for my failure in the second meet. I feel ashamed in front of my family, nation and coach Mohammad Bana, and apologize for the disappointment,” the Iranian athlete said.

Babajanzadeh Darzi’s hopes of qualifying for a repechage bout were crushed after Turkish wrestler Riza Kayaalp downed Popp 0-8 by technical fall in the semifinal round, and the 25-year-old German did not manage to advance to the next level.

Mijain Lopez Nunez scooped the gold medal for Cuba with a 6-0 win over Kayaalp.