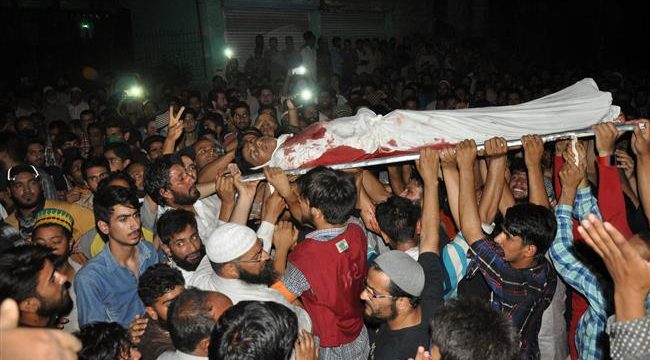 Four people have been killed in clashes between Indian government forces and pro-independence protesters in the Indian-administered Kashmir.

The Indian forces fired live ammunition and used pellet guns to respond to stone throwing by protesters in Kashmir’s Aripanthan Village, west of the city of Srinagar, on Tuesday, a police official said on condition of anonymity.

The source further said that at least 15 other protesters were also wounded in the clashes, three of them in critical condition.

The deaths reportedly sparked more protests in nearby village, where people chanted “Go India, go back” and “We want freedom.”

The protests came nearly six weeks after the killing of a popular rebel leader in the Himalayan region.

The Tuesday deaths bring the number of the people killed in anti-India protests in the recent weeks to 63, including two policemen.

Kashmir lies at the heart of a bitter territorial dispute since India and Pakistan became independent in 1947.

New Delhi and Islamabad both claim the Himalayan region in full, but rule parts of it. The two countries have fought two wars over the disputed territory. They agreed to a ceasefire in Kashmir on November 26, 2003, and launched a peace process the following year.

Since then, there have been sporadic clashes, with the two sides trading accusations of violating the ceasefire along their de facto border dividing the disputed region.