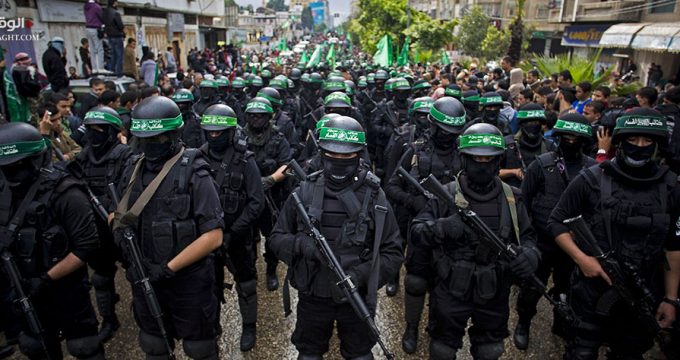 Alwaght- The different ceremonies of Lebanon’s Hezbollah in recent years have witnessed appearance of veiled forces in full black. These forces who are majorly stationed in the southern suburb of Beirut are elite forces of Hezbollah and are dubbed Rezvan Unit. They are highly skilled at shooting. Some suggest that Hezbollah only in specific conditions deploys its elites for fighting.

Having in mind that Hezbollah keeps its security and military activities confidential, there are not much information about this unit of elites. The speculations that appear about the unit are only media assumptions. However, according to the news reports and data available, the in-black elements of Hezbollah include rapid-reaction and special forces. They have seen tough training courses and are proficient. The have been trained according to rough internal and regional circumstances.

According to sources close to Hezbollah, the elite unit has a military code that shows its identity in the pyramidal structure of Hezbollah. The unit was founded some time earlier from special forces of the Lebanese resistant group. It is one of the most significant and most trained military units that is designed to address special fighting conditions and special battlefields. The elite force is tasked with duties that no other groups can do. Rezvan Unit was formed after assassination of Imad Mughniyah, the former commander of Hezbollah’s special and rapid-reaction forces.

The unit is an outcome of ideas of Imad Mughniyah to confront the Israeli regime. Its structure is based on the reviewed military techniques by Lebanon’s Resistance.

According to some media sources, the military commander of Hezbollah elite force is Abu Ali al-Tabatabaie. The Israeli regime has a huge lust to assassinate him. A failed operation to assassinate this Hezbollah’s military leader was launched by Tel Aviv in 2014 winter during which the Israeli air force hit two Hezbollah-bound vehicles in Quneitra town near Syria’s Golan Heights which are occupied by the Israeli regime.

Joining Hezbollah’s elite forces demands passing very difficult stages. The filters make them turn into most trusted and most outstanding forces of Hezbollah. The very complicated stage for personal qualifications of the applicants is one of the most basic filters of the recruitment process in Rezvan Unit. The newly approved applicants then go to next stage for tough military and physical training and practicing in a bid to determine their resistance in the strenuous circumstances. This stage takes a long time that includes theoretical studies, practical training, as well as taking theoretical and scientific tests. Success in all of these tests is essential for membership of the Rezvan Unit.

Successfully passing all of the stages of rough recruitment, the applicants join Hezbollah’s elite force. Then they go to further military and theoretical training courses to test resistance in different operational conditions all to develop into strong men with high morale and ambitions so that they are prepared for intricate and hard operations. Order is one of the major features of this elite unit. They know well who to aim their guns at, and they know well who is their key enemy.

They pass special military expertise courses as well as an array of military knowledge theoretically and practically inside and outside Lebanon. They learn unmatched methods of fighting in different ways. The sources add that these methods are majorly created and are not copied from the current fighting methods. They, in fact, are in full compliance with Hezbollah’s infrastructures and doctrinal approaches of its members. The elite forces learn how to work with a wide range of guns so that if the need arises use unfamiliar weapons that Hezbollah does not have.

The Israeli website Walla, which is said to be close to the Israeli intelligence services, in a report has shed light on Hezbollah’s military capabilities, adding that Rezvan Unit is capable of sending into the Israeli settlements forces who can launch assaults inside Israeli territories and then get back home in Lebanon safe.

The British weekly The Economist has presented a report about the personal capabilities of members of Hezbollah’s Rezvan Unit as an elite force, writing that those forces are able to engage with adversaries in mountains and heights in wide-ranging areas. They can advance in an unmatched pace, and are of high professionalism. They are resistant to tough conditions during the fighting circumstances.

Would presence of Rezvan Unit and Harakat al-Nujaba, an Iraqi paramilitary group, strengthen Aleppo’s equations on the ground?

Along with deployment of Hezbollah’s special forces whose number is not revealed, reports say that around 2,000 of member of Harakat al-Nujaba special forces were sent from Iraq to Aleppo. They are said to be well-equipped and well-prepared.

Therefore, now that the Syrian forces and Russian air force along with their allies from the Resistance Axis are focusing on Aleppo operation, it is too early to decide if the small-scale advance of the armed groups in Ramosa is a success. The forthcoming hours would see massive Syrian assault to regain control of Ramosa and thus tighten blockade of the Aleppo.