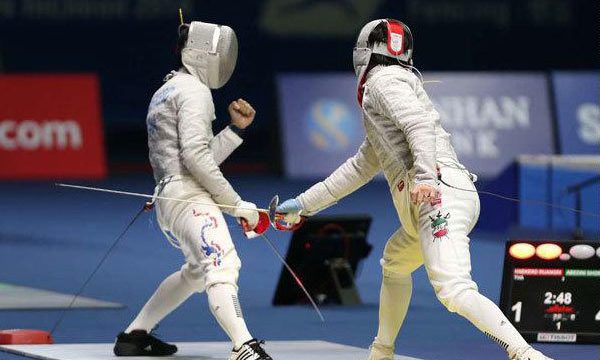 RIO DE JANIERO, Aug. 11 (MNA) – Iran’s only fencer who has been a surprise by defeating world’s great figures has just come short of a medal for Iran’s delegation.

Mojtaba Abedini who was a novelty and defeated all his preliminary rivals of prestige was keeping hopes for Iranian delegation as well as nation at home for a medal early in the games; however, his heroic advance was cut short of bronze medal when on Wednesday evening he was defeated two times in a time a win was required; in semifinals, Abedini lost to his US rival Daryl Homer before a second defeat by South Korean Kim Young-Hwan 15-8.

Abedini was in the spotlight when he defeated his French, German, and South Korean rivals in the preliminaries and was the first Iranian in fencing to break the ice and to advance up to the semifinals and fight for bronze medal.

Abedini told Mehr News correspondent in Rio that he had done his best to make happy his nation by a medal anticipated at home; “the referees, I think, was not unbiased and in both matches with the US and South Korean rivals, they did not give me few scores I should have received; anyway, Iran’s fencing has done a giant leap forward and it will be a matter of time receiving a medal in future Olympics,” he told Mehr News. “I apologize to my nation for not getting the medal.”

In a related story, Ali Pakdaman, Abedini’s fellow teammate in sabre, was eliminated in the very first match against Belorussian fencer. Iran’s sabre national squad is in Rio with Peiman Fakhri as manager and coach.