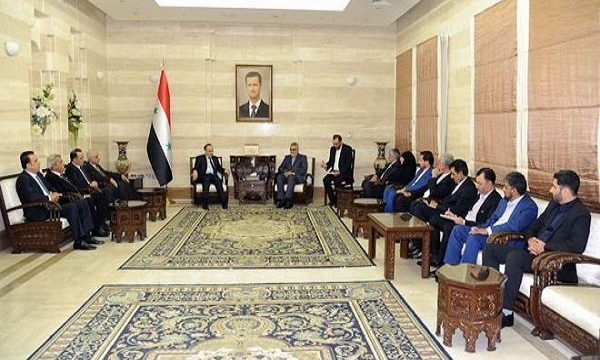 Syria paying for resistance against backers of terrorism

According to state news agency SANA, Mr. Khamis emphasized that Syrian government forces would be definitely a victor against terrorists thanks to the wise policies of its leaders, public resistance and support by Syria’s friends including Iran. He highlighted trade and economic ties with Tehran and demanded that it be improved to the level of political relations. “Syrian government will remain resistant in economic terms as well in bringing debacle of the terrorism,” said the prime minister.

Mr. Boroujerdi for his part said that Iran and Syria has had strategic and historical ties, with Iran advancing its principled policy of supporting the regime in Syria in its fight against terrorism under any circumstances; “the recent events in Aleppo is a turning point for Syrian crisis which indicates that terrorism will backlash to its supporters who conspired in unprecedented levels against Syria and the rest of the region,” Boroujerdi told the meeting.

“Today, Syrian government and people pay for their resistance against this conspiracy,” he added. Mr. Boroujerdi and his delegation had met with Hadiyeh al-Abbas, Syrian new Parliament Speaker on Wednesday.