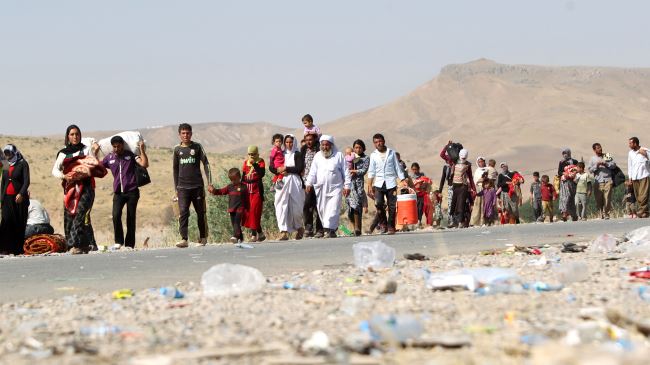 Izadis in Iraq’s Kurdistan region and across the world have held vigils to mark the second anniversary of Daesh massacre in the town of Sinjar, and call for the release of those still being kept as slaves.

Scores of people gathered at Sharafadeen Shrine on the outskirts of Sinjar northwest of Baghdad on Wednesday, calling for international help to bring perpetrators to justice and secure the freedom of some 3,770 women still in Daesh captivity.

“My only wish is to save our sisters who are under the captivity of Daesh,” an elderly Izadi woman, who managed to escape the terrorist group in August 2014, said.

“We do not want anything. We only want our mothers and sisters to be free,” said another Izadi woman, whose family members are still being held by the Takfiri group.

“It is true that Shingal (another name for Sinjar) is liberated but there is no celebration until our girls are free,” she added.

Elsewhere on the suburbs of the Iraqi Kurdish city of Halabja, many people climbed a hill to commemorate the liberation of Sinjar in November 2015 from Daesh militants.

Nearly 4,000 Izadis also took part in a silent march through Turkey’s southeastern Kurdish-populated city of Diyarbakir to commemorate the massacre and their loved ones who were taken hostage.

In London, Yazda, an Izadi advocacy organization, held a commemoration in coordination with several other Britain-based groups, asking the UN to help free Izadi women and girls who were taken as sex slaves by Daesh militants.

A candlelight vigil organized by the Free Yazidi Foundation was also held in front of the White House in Washington DC.

Additionally, a march organized by Yazda was held from Alexanderplatz square to the Brandenburg Gate in the German capital of Berlin.

In August 2014, Daesh terrorists overran Sinjar and systematically massacred, captured and enslaved thousands of Izadis. The UN says about 5,000 Izadi men were killed and thousands more, mostly women and children, were taken into captivity.

Over the past few months, several mass graves containing bodies of people, including members of the Izadi minority group, have been uncovered in Iraq and Syria.

A United Nations investigative panel warned on Wednesday that Daesh is still committing genocide and other crimes against the Izadi minority group in Iraq.

In a statement, the panel urged action to prevent further deaths and suffering of the persecuted group.