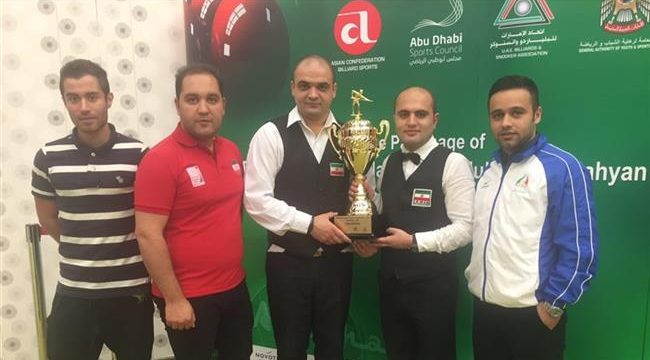 The Iranian men’s national snooker team has managed to pick up the trophy at the end of the 2016 International Billiards & Snooker Federation (IBSF) World 6Red and Team Snooker Championship in Egypt.

On Friday evening, the Iranian pair of Amir Sarkhosh and Soheil Vahedi gained the admiration of spectators at Pyramisa Hotel and Resorts in the Red Sea resort city of Sharm el-Sheikh as they conquered Chinese counter parts Chen Zifan and Yuan Sijun by 5 frames to 2.

The Iranian cueists started off well, and could rack up 75 points to claim the first two frames of the game.

The Chinese snooker players came from behind as the title clash went into the third frame. The East Asians rallied to win the period and the next in a thrilling down-to-the-wire campaign, and were on a par with earnest Persians.

The Iranian national snooker team, however, reclaimed the overall lead in the fifth frame, and went to great lengths to secure three straight frames and pull out a 5-2 win.

The 2016 IBSF World 6Red & Team Snooker Championship started in Sharm el-Sheikh on July 20 and wrapped up on July 30.

The Islamic Republic of Iran had dispatched three delegations to the tournament.

Iran’s B national pair of Hossein Vafaei and Hamed Zarrehdoust besides Iran’s C outfit, comprised of Milad Valihesari and Arman Dinarvand, had been knocked out of the contests in the quarterfinal round.