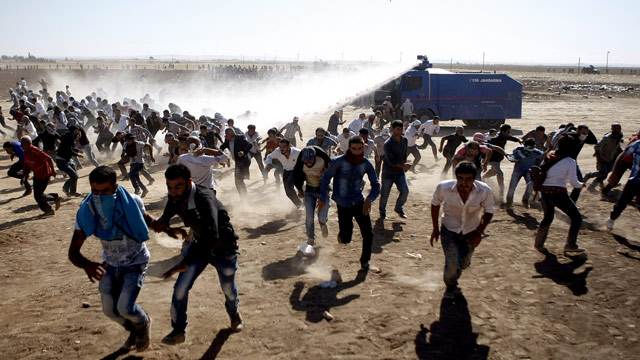 Alwaght- Exploiting the domestic division of the US-backed SDF (Syrian Democratic Forces), Turkey is looking forward to form a coalition comprised of some Arab and Kurdish forces in a bid to distance the independence-seeking Kurds from the border areas between Syria and Turkey.

Fresh clashes between Liwa Thuwar al-Raqqa — or Brigade of Raqqa Revolutionaries in English —, a split group of Free Syrian Army (FSA) that joined the Syrian Democratic Forces for fighting ISIS, and Kurdish units in border crossing of Tell Abyad, a town located next to the Turkish borders with Syria, have left dozens of fighters from two sides dead.

In past two days sporadic clashes were reported between two sides in Tel Abyad and Ain Issa towns. The clashes were said to have erupted after two sides ended up in tatters over leadership of the operations, raising the flags, and allegations of discrimination by SDF against the Arab fighters in favor of the Kurds. The Kurdish units of Democratic Union Party are active in battlefields under command of SDF.

The rifts have caused confrontation between the militant groups and the Kurdish units. According to data from specific sources, a number of militant commanders at invitation of General Abdul Jabbar al-Oqaidi, the chief of Borkan Al-Forat group, which translates Euphrates Volcano, are set to meet in the Turkish city of Gaziantep to discuss forming the command center of Northern Outskirts of Aleppo.

The command center of the Arab militants has the backing of Ankara to thwart advances and influences of the Kurdish units in northern Aleppo which once they happen, would be harmful for both Turkey and the Arab groups. The Arab fighters accused the Kurdish units of removing Arab residents in the area under the excuses of harboring the ISIS fighters, and asking them to join their combat units.

According to the sources, General al-Oqaidi has invited 19 armed groups to attend the meeting in the Turkish city, including Al-Tawhid Brigade which belongs to Muslim Brotherhood group, Katibat Al-Hurriya, and Al-Nasser Salah al-Deen Brigades which all are affiliates of Kurdish National Council which is said is taking its orders from Turkey.

The Kurdish National Council is one of the groups opposing Democratic Union Party that is led by Saleh Muslim. It appears that the new terrorist alliance that is set to be formed in Turkey meeting is an Erdogan’s tool to repel risks coming from formation of autonomous or fully independent Kurdish region in northern Syria.

According to the sources’ information, Turkey would pledge, during the meeting, to provide the participating groups with an array of weapons and equipment to enable them to form a pressing front in areas where ISIS is present. The alliance would seek capturing areas in Syrian territory that are next to Turkish borders in a bid to press the Kurdish forces away from Syria-Turkey border areas. Actually, Ankara is seeking making the most out of their division to make SDF fall apart.

On the other side, the local sources reported that the Kurdish units on Thursday delivered bodies of 47 of their fighters to their families in different cities of Al-Hasakah province. The Kurdish militants are said to have been killed during the fierce clashes took place in past three days in Manbij in Northern Outskirts of Aleppo.

The field sources suggested that clashes between SDF and ISIS in Manbij’s Al-Sarab district as well as Al-Rabita Street saw no dramatic changes, and the residential district was brought under heavy US-led coalition’s air raids and SDF’s artillery fire, which left 12 civilians killed.

SDF’s operations started since April 25 in northeastern Aleppo, and although Manbij has been under encirclement for 55 days, they failed to storm the town, as on the other side ISIS has declined to accept an offer for evacuation of the town.