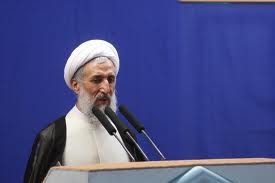 TEHRAN (Tasnim) – A senior Iranian cleric deplored a recent terrorist attack in Kabul that left more than 80 people dead, stressing that the Afghan government ought to identify the perpetrators.

Addressing a huge gathering of worshipers here in Tehran on Friday, Ayatollah Kazem Sediqi, Tehran’s provisional Friday prayers leader, noted that the Taliban did not claim responsibility for the three consecutive bomb blasts that rocked a rally in Kabul last week.

“International Organizations and the Afghan government should be accountable (and determine) who was behind this heinous crime,” Ayatollah Sediqi said.

He expressed condolences over the tragic event and stressed that it once again “demonstrated the incompetence of the so-called human rights bodies and international organizations (which failed to properly condemn the bombings and call for the perpetrators to be brought to justice).”

At least 80 people were killed after three explosions struck the large demonstration march in the Afghan capital on Saturday.

More than 230 people were also wounded in the attacks, which marked the deadliest in Kabul since 2001.

The peaceful protest was staged by Hazara people, a Shiite minority making up an estimated 9% of the Afghan population.

Many Afghan analysts and commentators chide the central government for its failure to ensure security across the country and its inability to prevent last week’s deadly attacks.