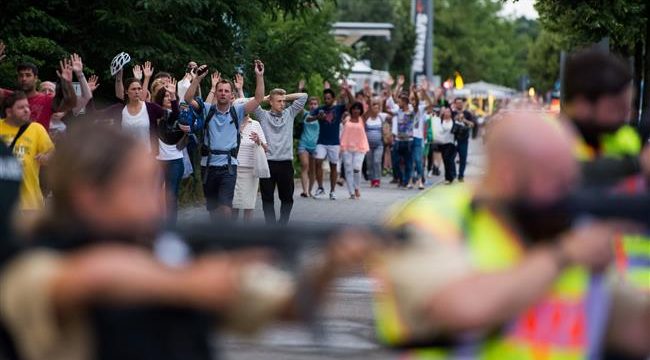 At least nine people have been killed in a shooting at a major shopping center in the southern German city of Munich.

Twenty others were also injured in the shooting, which police described as a terrorist attack.

There has been no immediate claim of responsibility for the shooting rampage, but supporters of the Daesh Takfiri group have celebrated the incident on social media.

“There is a major police operation under way in the shopping center,” Munich police wrote on its official Twitter account, asking people to stay away from the area. Security forces have also closed off a wide area around the site.

Munich police chief Hubertus Andrae identified the gunman as an 18-year-old German-Iranian man from Munich, who had no criminal record and whose motive was “completely unclear”.

“We found a man who killed himself. We assume that he was the only shooter,” police said in a Twitter message.

DPA reported that bomb disposal experts were investigating the backpack of the assailant, whose body was found about one kilometer (0.6 miles) from the mall.

The attacker was earlier reported to be headed for a nearby underground station.

A state of emergency has also been declared in the city, the country’s third biggest.

“There are still people in the shopping center. We are trying to get the people out and take care of them,” a police spokeswoman said.

A covered body lying in a street following a shooting rampage at the Olympia shopping mall in Munich, Germany, July 22, 2016 (Reuters)

“Like several EU countries, like the whole EU, Germany is also in the target area of international terrorism… the situation is serious,” he said on Wednesday.

The minister noted that investigations almost always proved false the alleged link between refugees and terrorism, but there are still tips being looked into.

People stand on a balcony of a building overlooking the scene of a shooting rampage at the Olympia shopping mall in Munich, Germany, on July 22, 2016. (Reuters)

“The motives for this abhorrent act have not yet been completely clarified – we still have contradictory clues,” German Foreign Minister Frank-Walter Steinmeier said in a statement.

German Chancellor Angela Merkel is scheduled to address the security challenge the country is facing at a Security Council session on Saturday, said Peter Altmaier, Merkel’s chief of staff.

“The cabinet ministers concerned are on their way to Berlin,” he added.

Meanwhile, US President Barack Obama “pledged all the support” Germany may need in the wake of the third major attack in about a week on European soil.

On Monday night, a 17-year-old asylum seeker armed with an axe and a knife attacked the Wuerzburg train passengers, severely wounding four people from Hong Kong and injuring a woman while fleeing the scene.

Amaq, a news outlet affiliated to Daesh, said in a statement that the person behind the assault was a member of the terror group.

The assailant, who was shot dead by police, was initially thought to be Afghan, but the German interior minister said that there were indications he was from Pakistan.

The other act of violence against civilians took place in the southern French city of Nice on July 14, when 84 people lost their lives and over 200 others sustained injuries after a truck ran through a crowd of people celebrating the French National Day, commonly known as the Bastille Day.