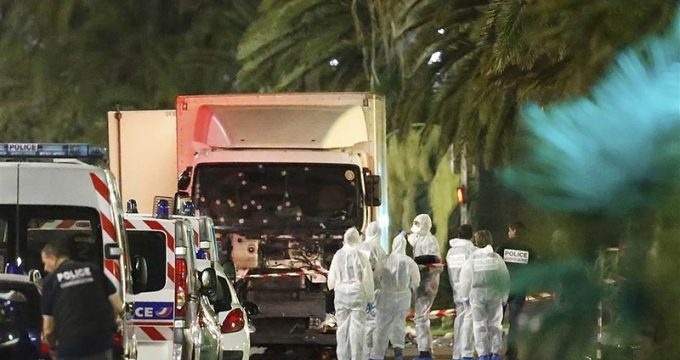 Over 1/3 of Nice attack’s victims were Muslims

Alwaght- Over one-third of people who lost their life in last week attack in Nice were Muslims, the head of a regional Islamic association said on Tuesday.

When a French-Tunisian man, Mohamed Laouaiej Bouhlel, drove a truck down a crowded street in Nice and killed 84 civilians, many people, including French president Francois Hollande, were quick to jump into conclusions that the carnage was linked to Islam without any evidence.

Amid rise of Islamophobia in France, Kawthar Ben Salem, a spokeswoman for the Union of Muslims of the Alpes-Maritimes, said that at least 30 Muslims were among the victims.

” Muslim funerals were being held for at least 30 of those who died during the Bastille Day attack, including men, women and children,” New York Times cited Ben Salem as saying.

The Paris prosecutor’s office, which handles terrorism investigations, said on Tuesday that all 84 people killed in the attack had been formally identified, meaning that the number of Muslim fatalities may be even higher. The number of people who were wounded was also raised, to 308 people.

The attack occurred after a fireworks display, as the Tunisian man, identified as Mohamed Lahouaiej Bouhlel, drove a cargo truck around a barrier and accelerated as people were slowly beginning to leave the beach area. The truck plowed into the crowds, tacking from one side of the road to the other. The road had been closed to vehicular traffic for the display.

ISIS terrorist group- that has killed thousands of Muslims in Islamic countries of Iraq, Syria, Lebanon and etc, claimed responsibility for the truck attack in Nice, but there was no evidence that the assailant had direct links to the terrorist group.

About 120,000 people in the Alpes-Maritimes are from the Maghreb — including Algeria, Tunisia and Morocco — and while the majority are most likely Muslims, some are Jews and Christians, according to rough estimates by various local associations. Nice is also a destination for Muslims from Senegal and other West African countries where French is spoken, and there is also a sizable community of Muslims from the Comoros Islands.

“This is complicated in terms of mourning for the whole world; this is also a little complicated for the Muslim community which is afraid that acts of violence,” will be directed at them, said Ms. Ben Salem. “We hope that this sends a global message that the barbarity touches the whole world and that the people here, the victims, are not those who commit the crimes in Syria and Iraq.”

At least 10 children and teenagers were killed in the attack, but because Lahouaiej Bouhlel was identified as a Muslim, she said, many people “don’t see that some Muslim children were killed with the other children.”

Moreover, former neighbours and relatives say Bouhlel was distant and uninterested in Islam.

According to stunning revelations made Walid Hamou, the cousin of Bouhlel’s wife Hajer Khalfallah, the attacker was fundamentally not a Muslim. Hamou says that Bouhlel blatantly flouted the basic tenets of Islam. “He never visited the mosque for prayers. Neither did he fast during Ramadan. He ate pork and used to drink alcohol, the two things which are strictly prohibited in Islam.”

Hamou further claims that Bouhlel used to severely thrash his wife Khalfallah. “He was not a Muslim, he was a s___. He beat his wife, my cousin, he was a nasty piece of work,” he added.

Lahouaiej-Bouhlel described his son as “always alone, always depressed” and not wanting to talk. The father also insisted that his son “had no links to religion”. “He didn’t pray, he didn’t fast, he drank alcohol and even used drugs.”

A former neighbor, who only gave his first name, Mansour, said Bouhlel did not go to the mosque and did not pray. “He is from a large, normal family, not extremist at all,” he said. “They’re like the rest of us.”

Bouhlel was delivery driver, had a police record for violence, theft and threatening behavior over the past six years. He was given a six-month suspended prison sentence in March after hitting a driver with a baseball bat in a road rage attack. He was not placed on probation or kept under supervision after the incident, judicial sources said.

Muslims also attend Bastille Day festival, because according to the Oucine Jamouli, the head of a Moroccan association, there is less drinking at the Bastille Day than at other big events in Nice because it is a family-oriented celebration.Drinking alcoholic beverages is banned, Haram, according Islamic law, Sharia.

It is also less religious than Nice’s other major festivals: a Christmas market, the Carnival festival at Mardi Gras and the fireworks for Aug. 15, which marks the Catholic feast of the Assumption of the Virgin Mary to heaven.

“There are so many people at the fireworks, of every race, every color, every religion,” said Mr. Jamouli, who runs a Moroccan restaurant a block from the Promenade des Anglais, where the attack occurred. “Terror basically aims at the whole society and at its freedom.”

People from at least 13 countries lost their lives, according to reports drawn from foreign ministries around the world, including citizens of Estonia, France, Germany, Russia, Switzerland, Tunisia and the US.